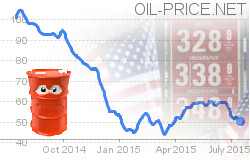 The decline in crude oil prices is not felt at the pump, to the dismay of drivers.

Since the price of crude oil started to tumble in June 2014, almost $80 has been wiped off the cost of a barrel of oil from the peak to the trough of oil market indices.
As a barrel of oil represents 42 gallons, that price fall works out at about $1.60 per gallon. However, the pump price of a gallon of gasoline only decreased by $1.20. Why?

Oil-price.net investigates the reasons why drivers aren't benefiting from lower crude oil prices. Economic concepts of the inelasticity of demand, the price the market will bear and supply shortages all seem to have played a role in preventing gasoline prices from falling in line with crude oil.

Crude oil price changes are registered by two indices. The West Texas Intermediate (WTI) is used by the North American oil industry and the Brent Crude Index is used by the rest of the world.
Generally the Brent Crude price is a little higher than the WTI. US oil refiners deal with both the WTI and the Brent price because they buy crude oil from the US and Canada and also from other regions in the world, such as the Middle East. However, both indices have fallen sharply over the last year, which means that crude oil has gotten cheaper. Historically, the price of gas at the pump tends to move in the same direction as the Brent price, rather than the WTI index.

Both indices rallied a little, fell back and then peaked again at $66 for Brent and $61 for the WTI in June 2015. The price has fallen again since and analysts including oi-price.net expect the two indices will remain between the $45 and $60 range until the end of the year. There aren't any prospects of the price of crude oil rising until 2016.

A retailer may argue that price falls do not feed through to the consumer immediately because stock bought at high prices has to be sold off and lower prices will only kick in once the retailer is able to restock at cheaper rates. However, the price has been considerably lower than the peak for the entirety of the first half of 2015 and pump prices haven't reflected the new normal of lower crude prices.

Another argument a retailer might give for not adjusting prices lower lies with the expected duration of lower prices. If a dip in the supply price for a commodity is only expected to last a short while, the retailer may justifiably claim that it isn't worth adjusting all prices lower, only to hike them back up again when the price anomaly ends. However, the low crude oil price has become embedded long enough for this justification to be invalidated.

The fact is that the price of gasoline at the pump has fallen over the past six months, but not by as much as the crude oil indexes.

Although gas companies passed some of the early falls in the price of fuel to their customers, they exploited the rise in the price of crude oil in February to increase pump prices again. In fact gas prices rose back in March above their mid-December levels, even though the price of a barrel of crude on the Brent index was $8 cheaper, at a rate of five times the rate at which crude oil prices were rising. The price of crude then took a downward turn after that date, while the pump price of gasoline and diesel continued to rise.

The highest historical average pump price for gasoline this century occurred in July 2008, when the price hit $4.06 per gallon. The peak in 2014, occurred in June of that year, at $3.69. Pump prices fell along with the fall in crude oil prices, bottoming out in January 2015 at a price of $2.11 per gallon for gasoline. Brent peaked at $62 in February 2015 and the average US pump price for gasoline rose to $2.21 per gallon. However, as the Brent crude index fell back in March, the pump price continued to rise. By May 2015 it had reached $2.71 per gallon, while the Brent crude recovered a little to $65 per barrel.

The pump price of gasoline has risen with the price of crude during 2015, but did not fall with the intervening dips in the Brent crude index during the year.

The pump price of gasoline disconnected from the Brent crude index price of oil in March 2015. While crude oil prices fell, gasoline pump prices rose. Here are some reasons why:

Crude oil gets turned into gasoline by refineries and although the demand from gasoline users should drive the price, the refineries can distort the price of both crude oil and gasoline. A number of US oil refineries suffered industrial action in February, cutting their output right at the time that New England, America's most densely populated region, encountered freezing temperatures.

The effects of the strike caused a rise in the price of heating oil in late February and a similar rise in automotive fuel prices at the beginning of March.

Prices are set by supply and demand. The crude oil market is currently over-supplied, which depresses the price. Reduced throughput at America's refineries caused the supply of heating oil, gasoline and diesel to fall below demand, causing the prices to rise.

When refinery capacity is reduced, demand for crude oil falls and oil producers have to send their output to storage. This year's strike action occurred at a time when the world crude oil production already exceeded demand, so that put pressure on the price of storage and cut the price of oil for immediate delivery because no one had any space left to hold it.

Lower production occurred just at the time when demand for oil from domestic heating and power stations was at its greatest, causing a shortfall in supply that also impacted the gasoline market. Where there are shortages, prices will rise. So strike action at US refineries caused crude oil prices to fall and gasoline pump prices to rise.

The effects of refinery shut downs are becoming progressively more severe each year because refining capacity in the USA hasn't expanded over the past decade in line with economic activity. This gradual tightening of capacity gives any closure greater impact on the price of gasoline.

The main reason the oil companies are not expanding their facilities is that idle refineries represent a lot of capital tied up without producing any income. By setting their throughput capabilities at maximum demand without room for outages, the oil industry is able to improve utilization, increase return on investment and maximize profits. This strategy means that refineries become bottlenecks during maintenance periods.

The green consumer and happy homeowner compound the problems of refinery shortages. The investment, planning and inquiry phases of building new refineries are becoming increasingly fraught. Everyone wants new refineries built ... just in someone else's backyard. Environmental opposition makes the siting of new refineries close to population centers with high demand for gasoline difficult to achieve. So higher gas prices are a sort of a tax. They are the price consumer pays in order to enjoy a cleaner environment. US drivers could be paying less for gas, but in reality they are perfectly happy paying a few cents more for gas in order to have less environmental hazards around their homes, and fewer birth defects than China.

You may not realize it, but without switching brands or grades, you put a different blend of gasoline in your car in the summer to the blend you drive on in the winter. Refineries produce a winter blend and a summer blend of gasoline. Peak heating oil season runs through to February and peak driving season picks up from June, so oil refineries schedule their change over to occur between March and May.

The refineries don't all switch over at the same time. Some will start the switch in March, others leave it until May. However, each refinery will experience a partial or total shutdown during the turnaround. This results in less gasoline available on the market, and, therefore, higher pump prices.

The rise in gasoline pump prices happens to varying degrees every spring. The peak of this maintenance-fueled price rise usually occurs between May 9 and May 24. The rise is usually more severe if unexpected factors occur, and this year had two of those surprises - an exceptionally cold winter and a worker's strike ran gasoline stocks low.

The turnaround from winter blend to summer blend is very expensive and complicated. They are often scheduled about two years in advance and the refineries do not postpone or cancel their plans because of price-exacerbating factors.

In 2009, the price of gasoline rose by 42.2 percent between February 2 and a peak on June 22. In 2010 the rise was only 9.2 percent measured from February 1 to its peak on May 10. Lower refinery capacity accounts for the price rises that occurred from March to May. Crude oil prices started to fall again at the beginning of July, so, now that the turnaround season has finished, gasoline prices should start to fall again.

Those figures are averaged across the country, however. Different states levy different levels of tax and different locations cost more for premises and so add on costs for the retailer. So those living in San Francisco pay more per gallon than people who live in Austin.

As previously mentioned, our oil price analysts do not foresee any major rise in the price of crude oil right through to the end of the year. So far this year, the price of a barrel of crude on the Brent index has gone from a low of $45 in January, up to around $60 through February and March, down to $52 in mid-March and up to around $65 through May and early June. The price fell again down towards $55 in early July.

When analysts say they expect crude oil to be at $45 to $50 by the end of the year, that doesn't mean that prices will fall constantly from $55 to $45 in a straight line over the second half of 2015. Market sentiment, or panic, can temporarily raise crude prices above that line. Gluts and storage shortages will knock the price below that line.

Gas stations are unlikely to lower and raise their prices exactly in synch with the crude oil price. They tend to bridge over the dips, which means they leave their prices where they are for a few weeks to see whether the price of crude will rise. If it doesn't, they may shift their prices downward.

Despite the price smoothing performed by gas stations, the general trend in gas prices will be lower over the second half of 2015. Thus, the temporary price hike caused by lower refinery capacity will age out of the price and reappear in March of 2016.

Demand for gasoline is relatively inelastic, which means rising prices don't tend to lower sales turnover. Consumers are happy with any price fall, no matter how small, but resent price rises. This factor makes gasoline retailers more likely to push up prices quickly with any increase in costs to get the pain over with quickly. They squeeze as much kudos from their customers with any supply price decrease by reducing pump prices in smaller, graduated steps. In other words, people are charged what they are willing to pay for gasoline, not what it costs.