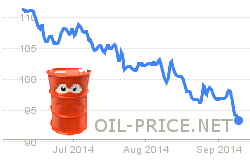 Brent crude dropped 20% for the quarter, the most in 2 years.

In June of 2014 the Brent Crude Oil Price hit $115 per barrel and many oil market insiders were predicting higher prices. Other analyst however, called a peak, and their predictions proved to be correct. By the beginning of October 2014, the Index dropped to $95 and predictions of further falls down to $90 or even $80 hold sway. What changed?

Back in June, the world suddenly became aware of the Muslim fundamentalist group called IS. This band of revolutionaries threatened to disrupt Iraq's oil output, just as that country was beginning to open the taps and sell to the world. OPEC's estimates of world demand for oil showed that the loss of Iraq's output would produce a large shortfall in supply. When supply cannot meet demand, prices rise. However, that simplistic view ignored many other factors that were coming into play in the oil market. Speculators talked the market up and encouraged panic buying. That panic pricing lasted long enough for those insiders heavily stocked with oil futures to offload them on the general public.

Hydraulic fracturing in the United States has redrawn the geo-political map and fundamentally altered the oil market. The United States was and still is the world's largest consumer of oil. Back in 2005, the US had to import 60 per cent of its supplies from abroad. That demand boosted the coffers of oil suppliers and made the control of major oil producing regions vital to US economic stability and so central to American foreign policy. By 2014, however, the USA only needs to import 30 per cent of its oil consumption. As fracking increases domestic production, the USA will switch from being a net importer to a net exporter of oil and that will change the world's political alliances forever.

The insurgency in Iraq dominated the world's headlines through the summer and into the fall of 2014. News reporters gasped as IS seized control of larger and larger areas of the recently liberated oil producing country. These reports lit a fuse under the oil price, but those price rises were generated through selective blindness. Anyone reading the whole newspaper on their commute to the city would have realised that IS controls the central region of Iraq and eastern parts of Syria. All of Iraq's oil is in the Shia-populated southern Basra region of Iraq and the Kurdish region in the north of Iraq. IS has imposed a rule of terror across vast tracts of desert in the only region of Iraq that has little oil.

Predictions of IS curtailing Iraqi oil sales overlooked a fundamental flaw in the organization and its leaders. IS needs money, and its leaders like luxuries. The declared "Caliph" (Muslim Pope) of the group drew ridicule across the world on his first appearance in video on Western news slots by sporting a $5,000 Omega watch. IS controlled a small oil field in Northern Syria, and, after taking over Mosul in Northern Iraq, got access to more. Far from shutting down production, IS cranked up sales by offering bargain basement prices. IS does not have access to international markets, however, and so their low sales price stolen oil cannot be counted as a factor behind the recent fall in the Brent Crude Index.

IS sells its oil in Turkey and smuggles it over the border. Turkey, NATO's second largest military power and ally of the United States, seems to frequently get away with flouting NATO's Middle Eastern strategy. The country was also found to be sanction busting during the embargo on Iran, but faced no punishments from the US. Opposition politicians within Turkey, however, are not so willing to turn a blind eye - Ali Ediboglu, of the Republican People's Party recently drew the world's attention to Turkey's back-door support of IS through oil purchases. IS oil sales now account for about 3.5 per cent of Turkey's oil supply, which is not a significant portion of the world market.

The fall in oil prices have been predicted since the middle of 2013. Three significant factors were clearly visible a year ago and these movements were bound to lower prices because of greater supply of oil. The end of the US-led embargo on Iran automatically presaged a glut in oil supply. Iran took America's blows on the chin as it attempted to develop a nuclear deterrent. However, the financial embargo on that country left its economy in tatters. Iranian blustering folded and they shelved their nuclear program. Iran's extreme need for cash meant that it would inevitably pump out as much oil as physically possible no matter how low their actions sent the oil price. Libya suffered a lot of damage to its oil infrastructure during the overthrow of Gadaffi three years ago. However, all that damage has been repaired and now Libya is back in business. Like Iran, Libya is desperate for cash and will sell as much oil as it can no matter how low the oil price goes. Fracking in the US is the third element that has increased oil supply. Although increases in US oil production were predicted, no one foresaw the great leap in production seen this year.

Recessions reduce the demand for fuel and raw materials for industrial production; booms, increase demand. Since 2008, when the Western world collapsed into recession, growth in China has kept demand for oil at steady levels. As the developed world recovered around 2011, the extra demand placed upward pressure on the price of oil and gas. In 2011, a tsunami caused the Japanese nuclear power plant at Fukushima to go into meltdown. Japan closed down all its nuclear power plants and reopened its mothballed oil-, gas- and coal-fired power stations. This factor placed enormous pressure on the world's fuel supplies keeping prices for all three power sources buoyant. However, this demand suddenly evaporated in July 2014 when Japan reopened all its nuclear power plants. Prices of coal and gas were the first to plummet and only the panic over IS managed to stave off the fall in oil prices for a short period. By the beginning of September 2014, it became clear that industrial production in Japan, Germany, France and China had started to fall. The expansionary phase of the world's economic cycle is coming to an end and recession is on the horizon again. Demand for oil had a sudden fall with the reopening of Japan's nuclear program and there is no growth in the world to take up the slack. Demand for oil will not rise again until the economic cycle returns to growth – an event that is unlikely within the next four years.

OPEC is a club of oil producers that was formed to control oil prices through varying supply. Its twelve members include Libya, Iran and Iraq, who are unlikely to volunteer to reduce their production. Algeria is another member and that country suffered destruction of its infrastructure at the same time as Libya. Algeria has also repaired its pipelines and come back to the market this year and they will not give up their only source of funds to repay all those repair costs. Nigeria and Venezuela need every cent they can get their hands on to fund expensive riot control in the face of their discontented starving populations. The United Arab Emirates are still paying their way out of the debt created by a collapsed property boom and so they are unlikely to vote for lowering production. Therefore, seven of the twelve members of OPEC are unlikely to vote for a cut in production. Of the remaining suppliers, Saudi Arabia is by far the largest producer. But the Saudis (who gave the world 15 of the 19 September 11 hijackers) need to maintain production to lavishly pacify their islamists.

One more factor is often cited to reason for higher oil prices and that is "peak oil." This theory proposes that all the oil in the world is running out and will not be able to supply the industrialized world for much longer. The increasing rarity of oil, makes in more precious. However, 2014 has seen several blows to the peak oil panic. Vast reserves have been discovered beneath the Eastern Mediterranean between Egypt and Greece, the South China Sea has yet to be fully explored and Brazil's estimates of off-shore reserves seem to rise monthly. Russia's threats to cut off gas supplies to Europe have removed all brakes on the development of fraking in Europe. The UK, Poland and Sweden are particularly keen to develop their resources. More oil has been discovered in the Arctic in territory belonging to Denmark and Russia and more shale oil lies beneath Russia than the US. New extraction methods and new discoveries mean that peak oil isn't going to happen any time soon.

The current oil price falls have been in the pipeline for a long time and they are set to continue. OPEC does not seem to be prepared to do anything and intends to debate whether to support a Brent Crude price of $90 at its next meeting in November 2014. The fact that this price level is not an urgent certainty for the club shows that it is unlikely to be defended. A fall to $80 seems likely over the next year. A rush to develop oil production in Europe could even see the oil price fall to $60 a barrel if Denmark is going to find a market for all its Arctic oil. If there is anyone in the world that would find such a price difficult to contemplate, it must be Russia. However, at the beginning of October 2014, Russia's central bank announced a $60 price would be its trigger to intervene in the economy. That shows that even the Russian's can see further price falls ahead and are planning for them.