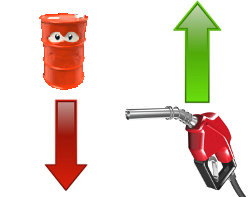 The price of gasoline does not always follow changes in the price of crude oil.

Why Gasoline Prices Refuse to Slide

Crude oil prices have been in the news off-late for the sudden fluctuations in the international market. Various factors such as a weak global economy, a strong dollar, and easing of tensions in the Middle-East have all led to the fall during the April-June 2011 period. The price per barrel of crude is around $90 as of June 2011. However, the price of gas at the filling station has stayed pretty steady at $4 per gallon or thereabouts depending upon which part of the country you live in. According to our estimates, the price of one gallon of gas will average at around $3.86 during the summer holiday season of 2011.

The price per gallon of gas at the pump is determined by various complicated factors and a whole range of issues which includes - the demand and supply of crude oil along with factors like inflation, local taxes and changes in currency valuations. A typical breakup of the per gallon gas price would be as follows:

Though demand and supply is responsible for substantial hikes, "free enterprise" is to be blamed at all other occasions. And how? The moment there is speculation that crude will be trading higher, retailers usually increase their prices in an attempt to keep their margins intact for future purchases. Contrarily, when the price of the crude decreases, retailers are not inclined to lower rates as fast as they have raised it in order to maximize profits.
When the crude is in an upward spiral, the retailers have little or no opportunity to earn profits. But when the crude is cheaper, they see a chance to capitalize on the situation and delay lowering of prices at the pump. It might be correct from their point of view because if they suffer losses, they may have to shut down their business. This in turn will lead to fewer jobs, lesser competition and even higher gas prices.

For the present situation, lay the blame on the federal monetary policy for the spiraling commodity prices, including the oil. The Obama administration's proposal to do away with tax breaks for the oil industry has increased the cost of production; this is reflected in form of high gas prices at pumps. The fact is, not only major oil companies, even small domestic firms are being affected by this move. Small firms account for about 90 percent of the country's oil and gas wells, and abolishing tax breaks does not bode well for gas prices in the domestic market. Reduced domestic oil production and supply will lead to greater reliance on foreign oil pushing us into the vicious cycle again.
The government also recently decided to curtail drilling in the Gulf of Mexico. This has led to supply shortage of 10 percent making gasoline more expensive. And this according to me has made profit-loss graph equation of oil companies very volatile. In simple terms, they make a profit when the going is good and the moment they feel threatened by higher taxes, they simply transfer the price rise to consumers.

There also have been reports that some oil companies stockpile crude instead of sending it to the refineries when the prices are low. The logic is to make profits when the prices rise further in the global market. With the price of crude dropping significantly and demand for gasoline expected to rise with the onset of 2011's summer, these companies hope to make a killing when the crude starts moving upwards.

Another important factor that determines the price of gas at the pump is the tax that is levied on gasoline sales. Every state has its own policy in this regard and that is one reason for the difference in gas prices across the nation. The national gas tax has stayed at 18.4 cents since the mid 1990s. Tax collected in this manner is usually spent on public transportation within the state. California has the highest gas taxes at about 47 cents per gallon while Alaska has the lowest at 8 cents.
In Indiana, it's double taxation for consumers because the state has a 7 percent tax on sales along with a 8 cents per gallon tax. California, Illinois, and Michigan, also have similar sales taxes though the percentage levied varies. The high price of gasoline has not been a deterrent to the many states planning to further increase their gas taxes. This is because higher prices at the pump fetch more money in the form of sales tax and this boosts the state's budget significantly. Connecticut, Maryland, Hawaii, and Nebraska have passed legislation on gas tax hikes. New York, however, is toying with the idea of doing away with its gas tax of 33 cents a gallon.

We expect that prices will come down during the summer of 2011 and will stay that way till late July or so. This is when the hurricane season would have set in and offshore drilling platforms and refineries often have to shut down operations due to storms.
After a small gain, prices are likely to drop again by the end of October or early November 2011. However, natural calamities or political upheavals in any part of the globe will have an impact on the price of crude and may push up rates at gas stations in their wake. Speculators are also, to a certain extent, responsible for the drastic fluctuations in gas prices.