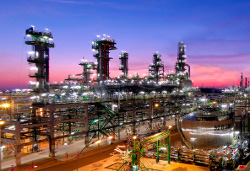 Lack of US refining capacity is partly to blame when gasoline prices spike.

The debate is raging in full swing: the dearth of new refineries in the US. Many are surprised to see the continued increase in oil prices despite the surge in domestic oil production. Could refineries be the missing element in the equation, they wonder. 'Why not just build new refineries and scale down the price of oil,' our readers continue to ask us. Yes, it's a fact- no new refinery has been built in the US in the past three decades. The last refinery constructed in the US at Garyville, Louisiana was way back in 1976. So, the question is reiterated as the point is so obvious: new refineries. But then, there aren't any easy three reasons, nor is the dimension only four.

First though, let's take a look at the prevailing price of oil. According to a AAA fuel gauge report, the national average for a gallon of gasoline is $3.62 - more than 13 cents from the previous week and 24 cents more than a month ago. After the fall in May and June, gasoline prices have increased gradually for the last seven weeks, adding pain to the already pained consumer. Is this because of dwindling oil reserves? Well, of late domestic oil production has increased by fourteen percent in the last 12 months. According to government sources, the oil production in the country hit the highest 'quarterly level' in almost a decade (for the first three months of this year). And, US produces 55 percent of the oil consumed in the country, mainly due to production spikes in Texas and North Dakota.

Clearly there is oil, so shouldn't the oil price decrease? After all, the more the commodity, often, lesser is the prices. Put it that way, the present oil prices do sound ominous. It's not as if higher demand has hiked the oil prices. On the contrary, demand for oil has been decreasing with fuel efficient cars and ethanol blended gasoline. This July, crude oil demand in the U.S. dipped to its lowest in four years on the back of average economic growth in the country, according to the American Petroleum Institute. The demand for gasoline fell 3.8 percent this July with consumption down 1.1 percent. After the peak in 2007, demand for gasoline has been sluggish. That is, despite increase in the price of crude, demand for gasoline is at record low. So, the speculation does gain force - are lack of refineries hampering the fall in the price of oil? North Dakota produces more than 600,000 barrel/month but has only one refinery in Mandan. An element of bafflement does linger to see the country producing substantial oil and yet importing refined products.

There is colossal gap in the realm of production and refining capacity in the country. The refineries are churning at full capacity which makes them profitable, but on the downside there is no room for mistake. They have to deal with variable demand on one hand and higher costs of inputs on the other. Recently, Sunoco Inc. announced closure of its largest refinery leading to fears of fuel shortage and higher oil prices in the US. Fortunately, a deal with the Carlyle Group saved the day for Sunoco Inc. and the oil industry. But, the problems in the refining sector are far from over. Two refineries owned by Sunoco Inc. did close in the last eight months, which means a loss of nearly half the gasoline and other refined products in the East coast.

True, new technologies have increased the domestic oil production. For once, though, the infrastructure in the US has failed to catch up with the surging domestic oil production. Barges, rails and trucks, believe it or not, still transport crude. Naturally, the oil barely reaches the refineries and this mode of transport also makes oil more expensive for the consumer. How about pipelines? We know that imported oil is expensive. Still, the Marcus Hook refinery continued to import oil at $114 a barrel in 2011, even when the West Texas Intermediate crude traded lower. Why? Lack of pipelines, again. And with this paucity in pipelines, crude produced in the country isn't reaching the refineries. Of course, the much hyped Keystone XL pipeline would connect Canada's oil with refineries in the Gulf of Mexico and Houston, but that may take years.

Staying with refineries, the need for pipelines is more pronounced in the Gulf coast. The refineries in the Gulf coast contribute about 45 percent of the refining capacity, and 30 percent total crude oil production in the US. Of late, the imports have declined in the Gulf coast, thanks to drilling in the Eagle Ford Shale in Texas and Bakken shale in ND. Unsurprisingly, import of the more expensive light sweet Nigerian crude stood at 150,000 b/d in January, the lowest since 1996. (For the corresponding period, there's decline in the import of Nigerian crude to the East coast too.) Yet, imagine the figure with more pipelines in the region. Yes, the crude from Eagle Ford from Texas has started to arrive in the Gulf coast. However, the crude is sweet light. Most of the refineries in the Gulf Coast are more sophisticated, designed to process heavy and more sour crude. As investment to refine the lighter sweet crude is expensive, the only option for the refineries is to blend the different crudes. The irony.

Meanwhile, woes of the refineries in the East coast continue. Two have already closed, and the rest of them are barely managing to scrap through. These refineries are dependent on imported crude as they don't have easier access to cheaper West Texas Intermediate crude. Hence, they continue to import the expensive Brent crude. There are plans to transport oil from North Dakota to the East coast by rail, but when?

Although a continuation of the import story, the scene is slightly different in the Midwest. The refineries here are enjoying higher profits, credit to generous supplies from Canada and domestic oil. Imports from Canada reached 1.76 million barrels a day in the first quarter of 2012, an increase of almost 22 percent from last year (Source: EIA). Unsurprisingly, Canada is the largest supplier of crude to the US followed by Saudi Arabia.

Recently the Port Arthur refinery underwent expansion to almost double its daily capacity. So, why do refineries expand rather than build new ones? It's easier because of the environmental regulations. The apparent lack of logic in not having refineries does get answered when you take the environment under consideration. Refineries gobble up water, not to mention vast tracts of land, and contribute loads of CO2 to the air, as well. So, environmental regulation tends to be hard for anyone interested in refineries. The EPA regulations are also strict on the sulfur content Light crude is easier to process, has lower sulfur content so it's easier to get the environmental nod. Heavy sour crude, on the other side, has more sulfur and is more difficult to process. Sunoco Inc. is said to have lost $ 1 billion in the last three years, attempting to upgrade in accordance with the stricter EPA regulation.

Will the picture change? Everyone wants refineries, just is someone else's backyard. The new EPA regulation for new refineries scheduled to be released this November has been deferred because of the Presidential elections. How is it going to pan out? Mitt Romney is all for more drilling. He wants to drill "virtually every part of U.S. lands and waters" but is silent on his take on refineries. For his part, Obama is for 'energy independence' but with his strict environmental laws, no refinery is going to come up anytime soon. The situation is precarious. The demand isn't expected to rise anytime soon. EIA has lowered the forecast of oil consumption in 2012 and 2013.

Any destruction due to accidents (like the recent fires), weather conditions, and maintenance would affect the supply with immediate effect. For instance, the recent fire in the Chevron refinery at Richmond, California disrupted almost 16% of the supply in the region. Abundant reserves, yet prone to import fluctuations- which country would want to continue in this position?

If the refineries aren't taken care of, the dream of cheaper crude would continue to be a dream. That would be sad with the present domestic resources.