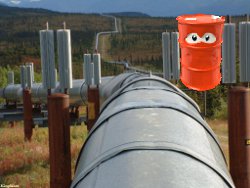 With the new Seaway pipeline, WTI crude oil will flow more freely from Cushing to the cost refineries.

WTI vs Brent- which is the better benchmark? Or, perhaps what is WTI and what is Brent? Primarily, there are two types of crude oil traded in the international markets (three really, but two majors): WTI (West Texas Intermediate) and Brent.

WTI used as a benchmark in determining oil prices, is crude oil of high quality. The spot price is fixed at Cushing, Oklahoma. WTI is lighter than Brent crude, has lower sulfur content- comparatively-and produces more oil during the refining process. With lesser sulfur, easier is the refining, and lesser the environmental effects on the planet (WTI has .24 % sulfur, while the sulfur content of heavy crude oil, like the one from Venezuela's Orinoco Belt, is as high as 4.5 %. A reason why many people love this benchmark.) To be noted, though: WTI is more important in- and is-limited to the US, probably because WTI is produced and refined within the US.

Brent is the real international benchmark. Two-third of the oil consumed in the US is Brent, and two-third of international crude is priced to it. (Brent crude is sourced from fifteen oil fields in the North Sea.) Still the media and market persist in quoting WTI, rather. This is a US singularity, like the non-adoption of the metric system.

So is WTI far behind Brent in the race?

First, to a bit of history: In April 2007, with the shutdown of Valero Energy Corp.'s McKee refinery, Sunray, Texas, the oil inventories surged to 27 million barrels. The huge stock pile brought down the price of WTI crude-an artificial scenario, as it was more of a technical glitch. Consequently, a report released by Lehman Brothers Inc. (now defunct) stated that the WTI could no longer be used to gauge the international oil market. Though useful for future oil pricing, the benchmark had 'lost its utility' for near-term pricing, the report said. By 2009 Saudi Arabia, the second largest oil exporter in the world, had stopped using WTI as a price benchmark for their oil.

Back to the present, and to answer the question: Yes, the oil price of Brent and WTI exist in parallel universe, with WTI lagging behind Brent. Why? Oversupply of crude in the Midwest. With Canadian imports, and increased oil production in North Dakota, the Midwest gets more oil, which stagnates. In other words, there is a huge bottleneck in moving oil of Cushing. The physical delivery point for New York Mercantile Exchange (NYMEX) futures contracts, Cushing has the largest storage capacity in the US. In 2009 Cushing had shell capacity of 16.3 mmb and working capacity of 37 mmb. According to the US Department of Energy, the shell crude storage by the end of March 2011 was put at 57.9 mmb, while the working storage capacity stood at 48.0 mmb. So, fewer pipelines out of Cushing mean more storage, which in turn, translates to lower oil prices, with excess oil (when compared to Brent).

WTI is catching on

Lately, though, WTI has been catching up on Brent, here's why: a new Seaway pipeline, moving oil from Cushing to the Gulf coast. Come April 2012, more of WTI crude oil would arrive in the Gulf coast. Initial estimate indicate 150,000 barrels of crude arriving in the Gulf coast every day (after regulatory approval), increasing to over 400,000 barrels per day by 2013. With the given evidence, looks like WTI is closing in on Brent

With the Seaway pipeline reversal, there's renewed interest among investors. Already, JP Morgan has increased the WTI forecast to $110/bbl in 2012 from $97.50 forecast in October, and to $118 in 2013 from the initial forecast of $114.25. At oil-price.net, our 2013 forecast stands at $117. Further, the Brent-WTI spread is expected to narrow to $5 per barrel in 2012 and $3 per barrel in 2013. (On September 22, the WTI-Brent spread had reached $29.50). (Earlier this year, Bernstein and Barclays' estimated the Brent-WTI spread at $5 in advantage of Brent). Meanwhile RBC Capital revised its WTI outlook, from $90 per barrel to $100 in 2012 to and $160 in 2013 (from $100 per barrel )- while keeping the forecast for Brent prices the same. Also even if more oil arrives from Canada and North Dakota, the excess oil can be shipped through trucks and rails or with added pipelines.

These pipelines, though, may not be enough if the Keystone XL pipeline is brought into the equation. Shale oil production is increasing in Canada, and the Keystone XL pipeline would give the Canadian oil more access to the refineries in the gulf coast. But considering the opposition from environmental groups, and delay in government approval for the pipeline itself, the excess crude is still far away in the future.

For now: If huge speculation has kept Brent prices artificially higher, the focus has shifted. Indeed, the logistics seems clear, but then oil prices depend on other ground factors and market fundamentals as well. Yet, looks like WTI is closing in, and it would be interesting to observe the WTI-Brent spread in the coming days.

« Previous
Is Oil Fueling the Rise in Political Partisanship?
Next »
Iran, Oil and Strait of Hormuz