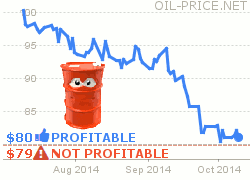 High-tech US oil producers need $80 per barrel to be profitable. Saudis need only $50.

A falling oil price is good for the US consumer and good for the US economy. Transport costs feed into the price of every physical product, so if oil gets cheaper, everything gets cheaper. If the oil price falls too far, however, the USA's recent fracking boom will come to an end. Forces are at play to end the USA's projected energy independence and return the country to dependence on the Middle East for its fuel supplies. The USA's long-term key supplier, Saudi Arabia, doesn't want to lose grip on its best customer.

Falling factory output in China and the onset of recession in Europe means that a continued fall in the demand for crude oil is inevitable. The recent return to production of Algeria, Libya, Iraq and Iran means that the world is already oversupplied with crude oil. The astonishing rise of production by hydraulic fracturing in the USA means that America is increasingly self-sufficient in oil. When supply exceeds demand a fall in the price of any product is inevitable.

When a market is over supplied, prices continue falling until enough suppliers are forced into bankruptcy to reduce supply to the level of demand. At that point, prices can start to rise again. This is the classic explanation of the causes of recession and recovery. However, the oil market is different. Lead times and start up costs are high in the industry and so production cannot just be turned on and turned off at will. Oil has a global sales price but location-dependent variations in production costs. Middle eastern producers responded to the peculiarities of the oil economic cycle by forming OPEC to limit supply in times of economic decline and support the price of oil. By controlling supply levels and sharing out the cuts between them, the 12 nation club can ensure that none of the producers have to go bust before supply and demand return to equilibrium.

The recent return of production by Algeria and Libya put pressure on OPEC's oil quotas. Both these recovering countries are OPEC members and so their sudden return to the market means that the club now exceeds its self imposed limit of 30 million barrels per day. The inevitable fall in the price of crude oil, caused by over supply, should have sent the members to the conference table for an emergency quota-slashing meeting. However, key members of OPEC fell silent, and stuck to the planned meeting schedule, meaning the group will not meet until November to talk about limiting output.

OPEC has no power to impose its quotas and so if the member states do not want to abide by them, there is little anyone can do about it. The group's stated limit of 30 million barrels per day would still see the market in over supply. Any quota-busting production spells disaster for the price of crude oil.

Saudi Arabia is by far the largest producer in OPEC, although on a global scale, their output is exceeded by Russia. It has always been in Saudi Arabia's interests to keep the price of oil high. This is because, despite decades of wealth, the county hasn't managed to produce any other industry that could sustain the levels of state spending to which the country has grown accustomed. Saudi Arabia uses the threat of reduced production and high oil prices to give it a very power voice in world politics and it is particularly adept at co-opting American military might to its pet causes.

Suddenly, Saudi Arabia seems to have switched its policy. It increased its production in September 2014 and not only fails to support the current price but seems to be actively pricing its sales to drag the global price of oil down. The country is now selling at a price lower than the level it needs to maintain state spending. It is dipping into reserves to enable it to undercut its rivals. The OPEC alliance has split and old rivalries in the Middle East are driving the current fall in oil prices.

The techniques behind hydraulic fracturing have been around since the 1930s. However, refinement of the process and its application to shale in the late 1990s made the process a commercially viable method of oil extraction. As the technique developed and was combined with horizontal extraction methods, hydraulic fracturing, or "fracking" created exponential growth in US oil production. By 2010, the success of fracking had removed the need for the USA to import gas and US companies skilled in the technique began to spread across the world looking for earning opportunities in other countries. Large shale oil basins were discovered across the globe and US businesses looked set to reap the rewards of their expertise by dominating oil production by this technique.

In a perfect market, unhindered by politics, cartels or special interests, the price of a product is the only mediator between its demand and its supply. When demand for oil exceeds supply, its price rises, making extraction from inhospitable locations, like the Arctic tundra or offshore platforms, economically viable. More of the world's oil becomes profitable and so more is extract by extending production to previously unprofitable locations. Output rises to meet demand and the price stabilizes. If supply exceeds demand then the price falls. If the price falls far enough, and stays low long enough for those extractors in high-cost locations to go bust, excess production will be squeezed out of the market and the price will rise again.

The expansion of fracking in the United States has contributed to over-supply. Fracking is only viable at a certain oil price level, so, in many ways, by forcing over-production, hydraulic fracturing oil producers have contributed to their own problems. Investments were made in low-margin extraction and loans were secured to finance them, based on the convention that no matter how much oil the US produced, price levels would be maintained by OPEC cutting production. Financiers did not have to worry about the dangers of supply and demand because OPEC would ensure price stability.

Saudi Arabia has put its foot down. In the face of triumphalist crowing about energy independence in North America the country has turned to the classic economic model of price being determined by the equilibrium between supply and demand. Not only are they not reducing their prices, they are actually cutting them. They are not lowering production levels, they are increasing them. The Kingdom has large cash reserves and they seem to be prepared to coast on their savings for as long as it takes for their competitors to go out of business. Fracking is vulnerable and will not survive a price drop unless the US oil industry reorganizes.

Thanks to financing costs, new hydraulic fracturing sites are unlikely to be opened up if oil stays at less than $90 per barrel for any length of time. Each extraction project is different and incurs different plant investment costs, returning different profit margins. The banking industry, however, works on a blanket level of a need for $80 per barrel for a project to turn a profit. The extra $10 is needed to ensure the banks get paid back.

However, some shale oil regions, such as the Eagle Ford Shale and Permian Basin in Texas can still turn a profit selling at $53 per barrel. The problems faced when assessing any new shale oil project include distance to distribution points, local availability of accommodation, the capacity of the transport network and availability and price of expertise and staff. These factors can make crude oil cheaper to deliver from Texas or North Dakota to refineries on the East Coast, or it can make Saudi oil, arriving by tanker, cheaper than domestically produced oil.

Hydraulic fracturing became a viable business in the US because of a rising oil price and also because of falling production costs. Necessity is the mother of invention and it should not be assumed that the industry will not continue to develop cheaper methods and equipment. The shale oil producers have been living high on the hog with a gold rush mentality, spraying cash in all the communities into which they move. Therefore, there is a lot of fat to trim to bring inception and operation costs down. High payments to property owners for drilling access are probably soon to be dramatically reduced, building schools and community facilities are expensive public relations exercise that may not happen again.

Supported by technology and aggressive cost cutting, the US shale extraction oil producers can continue to expand their share of the market. Pipeline projects to distribute domestic oil to US refineries would lower delivery costs and further reduce the price disadvantages of shale oil. US producers need to be smart and act quickly, however, the Saudi Arabia Oil Policies and Strategic Expectations Center recently revealed that the Kingdom is prepared to go as low as $50 per barrel, which would be a tough price to match.