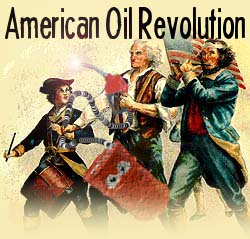 The American Oil Revolution is underway, thrusting the USA towards oil-sufficiency and beyond

By now, you'd have heard the news (yes, the world doesn't end on February 30, let alone on December 21) that the US is set to become the world's largest oil producer in a decade. So, how did this great nation, perceived as emaciated on the oil front, turn around?

After all, not long ago, any analysis of the oil scene in the US treated it- predominantly- as an oil importing country Well, the crude oil production in the US, according to the latest monthly report of EIA, averaged about 6.5 million barrels per day in September 2012. As a fact, this is the highest volume in almost 15 years.

So what exactly did the US do to warrant all this? What changed the game-plan? The short and long answer: Shale boom.

That shale has changed the oil landscape of the US would be a gross understatement. In fact, the present energy revolution in the US is mainly due to shale. What is Shale, so? Oil Shale is nothing but a type of sedimentary oil bearing rock with low permeability which contains a mixture of natural gas and liquids including oil (Shale oil). It's controversial as the extraction process, fracking, is harmful to the environment. There's also the looming fear of induced earthquakes because of fracking. So what's the extraction process? Fracking is the method used to extract gas from the shale formations. A hole is drilled into the rock and a mixture of sand, chemicals and water are injected at high pressure. Under the impact, the rock splits releasing the gas. Irrespective of popular opinion, extracting shale is expensive. But, what wasn't possible a decade ago is happening today not only because of technological advances, but also due to the current price of oil. On the other hand, returns from conventional wells aren't encouraging either. Yes, the energy scene in the US is changing.

The IEA predicts the US to overtake Saudi Arabia and Russia as the world's biggest producer of oil by 2017. Also, on the anvil: US becoming self-sufficient in oil by 2035 and North America trudging on to become a net oil exporter sometime around the year 2030. Exxon Mobil Corp.'s annual outlook, for its part, expects North America as an exporter of oil and gas 'by the middle of the next decade.' Both these reports, if you care, are closely monitored by oil investors. If you're one, do factor the EIA prediction of oil production at 6.8 million barrels per day in 2013, which will put in the oil prices at about $3.44 per gallon next year as against the 3.64 gallon in 2012. Yet, from the long- term perspective this is definitely a good time to be in a region with immense potential for growth. Or not. Ostensibly, environmental curbs over fracking can change everything written on the wall. Of course, these are intriguing times. If we have to, we'd like to call this period the 'transitional phase.'

It has to be noted that this 'shale bloom' occurred during the present administration. Or rather, in spite of it.

After the Deepwater Horizon oil spill in 2010, the Obama administration issued a six-month moratorium on oil drilling permits for new projects. Since then, new projects take longer with more stringent rules and regulations. Consequently, in 2011, according to the Institute for Energy Research, oil production on federal lands fell to 11 percent from 2010 levels, while oil production on private and state lands increased by 14 percent. As per EIA estimates, oil production from federal waters in the Gulf of Mexico would increase in 2013, but not to the levels prior to the accident in 2010. To make a comparison: The Gulf of Mexico was producing about 1.71 million barrels of oil per day before the moratorium and about 1.09 million barrels per day after the moratorium.

When oil prices soared in 2008, President Bush and the Congress allotted additional federal lands for oil exploration. Despite those plans, according to the Institute of Energy Research, the federal government leases 'less than 2.2 percent of federal offshore areas' and less than six percent of federal onshore areas. Also, soon after taking office for a second term, the Obama administration closed off 1.6 million acres of Western US territory originally meant for oil shale and tar sands. In other words, the shale oil production is mainly on state and private lands. The Congressional Research Service believes that almost 96 percent of the increased oil production in recent times was produced on state and private lands.

Of course, if not for the shale bloom, the oil prices would have gone through the roof with similar results for unemployment figures. As per existing laws, the oil produced domestically cannot be exported, thus the possibility of even lower oil prices. Should the government open the market for exports, the oil prices will see a revision. However, it'll take another decade at least, for the US to become a major gas exporter. In terms of energy security, from a futuristic point of view, shale will reduce the US dependence on oil from the Middle-East, Nigeria and Venezuela.

Recently, Norse Energy, a Norwegian company, filed for bankruptcy after failing to extract gas from the Marcellus Shale in New York. With the four-year ban on hydraulic fracturing by the state department, Norse Energy's wait to drill the 130,000 acres under lease proved to be too expensive for the company. Meanwhile, the UK government has lifted restrictions on fracking with the Energy and climate secretary saying that Sale gas could 'contribute to energy security in the country.'

Of course, talking about energy, it's not only shale, there's the Canadian Oil sands or tar sands too. Like Shale, this unconventional oil reached people only after the dramatic price rise in oil. In fact, compared to a conventional oil well, the extraction of these sands is about twelve percent dirtier, not to mention the pristine forests destroyed. If the Keystone XL pipeline manages to transport this oil to the Texas refineries, it would be a victory to the oil pundits at the expense of the environment. The Canadian tar sands produce about 1.5 million barrels a day, most of them coming from the Alberta oil fields. As a result, Canada is rather over-enthusiastic for pipelines to conduit the excess oil.

Anyway, how is the administration going to balance coal, shale and tar sands on one side and the renewable on the other? "As long as I'm president, we will not walk away from the promise of clean energy," said President Obama. According to Economic Modeling Specialists International, the six fastest growing jobs since 2010-2011 were related to oil and gas extraction. So, the challenge for the present administration: More jobs, faster economic growth or greener energy policies? (Hey, what's the point of energy without the Earth?)

Recently the Obama administration announced plans to allocate 285,000 acres of federal land in six SouthWestern states for solar energy projects. In spite of the odd efforts, there's confusion in the energy policies. Will the new-year bring in a clearer picture?