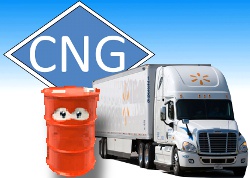 Savings are so substantial that entire truck fleets will switch to CNG in the next years.

It's as official as it can get. There's a shale boom scampering around the country. At the heart of it, there's cheap Natural Gas. Obviously, can the Natural Gas trucks be far behind? And, the truck operators are asking - should one be a luddite and sneer at the trucks running on Natural Gas or embrace them before it's too late? After all, forecasters predict no reduction in oil prices but a reduction in Natural Gas prices. As a result, the multi-year investment in a Natural Gas truck is guaranteed to pay for itself. Well, if the devil is in the details, let's go there.

Correspondingly, it's true. Many of the truck operators in the US are shifting to trucks fueled by Natural Gas on the strength of a new engine technology that cuts the cost of shifting from diesel fuel. So much so, industry forecasters including ourselves believe that 5% of all heavy duty trucks sold in 2014 will run on Compressed Natural Gas (CNG), up from 1% in 2013. Indeed, many of the trucking companies are already testing trucks running on Compressed Natural Gas and Liquefied Natural Gas. What's more, these trucks are also friendlier to the environment cutting emissions by about fifty percent than the conventional vehicles. According to news reports, UPS is planning to buy 1,000 Natural Gas trucks by 2014, while the delivery arm of retailer Lowe's has announced plans to shift all of its trucks to Natural Gas by 2017.

Why not? Natural Gas hasn't seen better times with complimentary mineral rights laws and new equipment adding to the euphoria. Also, the latest in drilling technologies have helped the gas producers tap hitherto unreachable resources, heralding in a shale revolution of sorts. Echoing this, the abundant Natural Gas has, it has to be said, sent the prices tumbling down. In the process, cheap Natural Gas has reduced dependence on coal and even nuclear power. By 2015, it is expected that the US would export Natural Gas too.

Since Natural Gas is still a regional commodity, unlike oil which trades in the global market, the prices will remain low for a while. Also, the Natural Gas boom could go on for a while because of a new pipeline in North Dakota - The Tioga Lateral Pipeline.

Now, the Tioga Lateral Pipeline is an eighty mile pipeline in western North Dakota. The brand new $170 million Tioga project connects a Hess Corp. Natural Gas processing facility in the Williston basin to the existing Alliance mainline. The 12 inch diameter pipeline can move 126 million cubic feet of rich Natural Gas per day (The Alliance pipeline has capacity of 1.6 billion standard cubic feet of Natural Gas everyday and is 2,300 mile long). In short, gas will move from Bakken wells to a larger interstate pipeline and then to the major hubs and processing facilities.

This pipeline is significant if you factor in flaring. You know, the Natural Gas that is burnt off as if air was free (It is- for now!). According to a study released in July, almost a third of the Natural Gas from Bakken's shale fields was burnt off. If you sit to calculate, the value of the 'burnt off' Natural Gas was more than $100 million per month. An absolute economic waste as this is a product that could be sold, not to mention the pollution it causes (although the byproducts are significantly lower than other fossil fuels as natural gas is 'clean burning'). So much so, North Dakota's flaring can be seen from space.

You might ask, what causes flaring? Paradoxically, high oil prices and low Natural Gas prices. Well. In addition, paucity of pipelines to transport the excess gas, as well. According to the State Pipeline Authority, thirteen percent of the flared gas was due to lack of pipeline connections. Where pipelines were available, there were processing hiccups like low volume pipelines and existence of high pressure wells alongside old low-pressure wells. In the case of North Dakota, in particular, the wells were in remote, rural areas.

Wouldn't storage facilities ease the problem, you ask? Well, unlike oil, Natural Gas should be processed to separate impurities like water, sand and other non-methane hydrocarbons and fluids before being shipped. After refining, the pipeline quality dry natural gas is transmitted. So you need facilities to process the gas and pipelines. Tioga Lateral Pipeline, as you may have guessed, has both. In addition, the lateral pipeline would also reduce flaring in North Dakota. A fact underlined as 'significant' by the Governor of the state, Jack Dalrymple.

Further, like Tioga Lateral Pipeline, the infrastructure to process and pipe is slowly cropping up in Bakken. Of course, it still has a rather long road to travel before catching up to the infrastructure in place for oil. Still, as more wells get access to processing plants, it's all good news on the gas front. To dig up some the data, since 2008 gas processing in North Dakota has more than doubled.

There are restrictions that help, of course. The Industrial Commission Oil and Gas Division, under the authority granted in section 38-08-04 of the North Dakota Century Code has rules to impose curbs on wells that flare gas for months. Apart from that, capturing Natural Gas has other advantages as well. Natural Gas produced from Bakken is more valuable as it is rich in Natural Gas liquids (NGLs). These NGLs (Propane, Pentane, Butane, Ethane and Natural Gasoline- wet hydrocarbons) are more valuable than dry gas from power plants. Experts vouch that one thousand cubic feet of Natural Gas from Bakken /Three Forks wells hold about eight to ten gallons of NGLs.

Now, back to Tioga Lateral: The pipeline is a game changer as it transports gas produced throughout the Williston Basin. Gas that would otherwise be flared or let off into the atmosphere is now captured and sent to markets. As Tioga Lateral connects Natural Gas wells in North Dakota to new processing facilities it opens the door for adjoining wells to connect to this pipeline. In effect, as more wells get connected to the gathering points, the pipeline will provide transmission services. Within a few years this will avalanche into a surge of domestically-produced Natural Gas coming on the market and prices will drop.

Also, the country has abundant shale gas reserves. According to the Potential Gas Committee, the United States has recoverable resource base of 2,384 trillion cubic feet. The inference is that the gas prices will remain low. Yes, Natural Gas engines are expensive and less powerful. But they save fuel in the long run.

Ultimately, trucks running on Natural gas will be a regular scenario on the roads, all things considered. Unfortunately for them, those who do not convert will obviously not be able to compete with fleets offering lower shipping costs. The point is that it's convert or run out of business. Kind of like when the personal computer came about, typewriters had a hard time to compete. As such it is an inevitable "disruptive technology", something that curiously happens with increased frequency in our petroleum industry.