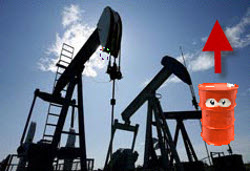 The year 2008 saw the American economy topple over like a towering stack of light weight cards with the financial and market crash. The recession changed the economy of the country and left many people without jobs and means to sustain their families. More houses were put on foreclosure than ever before, leaving an even larger number of families homeless and destitute with no one to bank on. The initial contention was that the primary reasons for the recession that hit the country in 2008 was the downfall of the financial services market and the housing market. More and more financial experts came forward with another, more accurate reason for the financial crash. The reason put forward and accepted widely was that the market financial crash was caused by the high oil price rise which shot to an all time high of $147 per barrel in the year 2008.

In order to help the economy to gain a firm footing, the Federal Reserve took up the initiative of increasing the monetary base (quantitative easing). Two years down the line however, this idea seems to be showing wear. Pumping billions of dollars into the lagging economy boosted spending budgets for some but at the cost of devaluating the dollar. On the plus side, the country's economy is slowly recovering. The oil consumption of the country that had taken a hit after the recession has also been picking up.

In a developed nation like the United States, every single aspect of business and life requires some or the other form of oil. As per the current scenario, crude oil is trading at much higher than what it was last at $87.82 per barrel on December 10, 2010. Truth be told, this price is nowhere as high as that which caused the Great Recession of mid 2008. The nation's economy is still recuperating from the recession though. Even a comparatively lower oil price at $85-90 per barrel adds to the heavy burden being lugged around by the consumers. It also adds to the woes of the financial market. When it is considered that the United States economy is still recuperating from the recession, the impact of rising energy prices is amplified.

While market analysts are running pillar to post to come up with solutions before the market crashes and brings them all down, the fact remains that the peak oil crisis has no reasonable solution in sight. The world economy now has a new backbone and that is the consumer rich country of China. The Red Dragon seems to have replaced the United States at least as far as relevance to the world economy goes. Most Asian economies seem to be thriving at the time when the American economy is reeling on a downward spiral path.

The problem here is that we seem to be caught in a vicious circle as far as market crashes and high oil prices are concerned with both of them aiding and abetting each other. A higher oil price increases the trade deficit of the US. This increased export bill leads to a weaker state of the dollar currency. A weak dollar in turn pulls up the international prices of dollar denominated commodities. This allows the oil prices to increase further leading to exorbitantly higher oil prices. A market crash for the US then becomes inevitable.

Analysis shows that there is a cyclical process where market health and oil prices modulate each other in opposite direction. In other terms the oil prices affect the global economic health adversely while at the same time, being greatly affected by it. The gains made as far as the US export and related avenues are concerned will inevitably be offset by the high oil prices as oil is priced in US dollars. It also needs to be understood that oil prices are factored in the export expenditure as shipping expenses for various companies as well. A weaker dollar might have some short term advantages for consumers but these will in no way outweigh the long term disadvantages of a weaker currency rate.

At the same point in time, lack of new significant oil discoveries confirm that there is an impending oil crisis that will hit the global economy. This would further drive up already accelerating oil prices making it all the more difficult for the US economy to keep the stock market from crashing without preamble. Peak oil prices are set to cause the largest tumble down in the history of the economy.

While do not typically make investment recommendations, we encourage investors to act defensively. To ensure that your investments do not suffer, read our research, anticipate macro-economic changes and think for yourself.

The global economy is headed toward an inexorable standstill. The reason for this is the shortage of energy channels available at a reasonable price. Consequently, the earnings that companies will show are bound to be a reflection of what is happening in the financial markets around the world. Protecting your investments and money ought to be your highest priority in these changing times.

« Previous
Can the World Survive the Impending Oil Crisis?
Next »
Is Shale Gas The Next Cradle of Energy?