The Strait of Hormuz is in the news again. The Iranian parliament is considering a bill that threatens to close this Strait to oil tankers from countries that support sanctions imposed on Iran. More than half of the members of parliament are said to have signed the bill.

Before that, what is Strait of Hormuz? The Strait of Hormuz is a strategic shipping route connecting Persian Gulf to the Arabian Sea and Gulf of Oman. The US Energy Information Administration characterizes the strait as "the world's most important oil chokepoint." In 2011, the strait witnessed a daily flow of 17 million barrels of oil per day. This is almost 20% of world's traded oil and roughly 35% of all seaborne traded oil, the agency reports. Further, the EIA estimates that on an average, 14 crude tankers pass through the waterway per day, with almost the same number of empty tankers entering it. The chokepoint? At the narrowest point, the Strait is just 21 miles wide. Blocking this neck, theoretically at least, is an easy possibility for Iran, cutting away nearly one fifth of the world's traded oil. Note also that this is a major shipping route for crude exported from Saudi Arabia (the world's second largest oil exporter), Kuwait, Iraq, Qatar and UAE. Almost 85% of the export is for Asian markets like Japan, India, South Korea and China.

The draft bill is said to be Iran's retaliation for the economic sanctions imposed on it by the US and European Union. The sanctions aim to curtail Iran's nuclear ambitions, especially using Uranium to develop weapons. Iran, meanwhile, insist that the reactors are for medical and electricity uses only.

Could Iran close the Strait?

The answer is an emphatic no. After all, the US' Fifth Fleet is stationed nearby. Iran would only be giving excuses for an invasion. In addition, leaked US diplomatic cables, from as early as 2010, show Saudi Arabia urging the US to attack Iran and destroy the nuclear programme (Thanks Wikileaks). Thus in the event of a war, the US may receive support even from the Arab world. Not a bad bargaining position for the world's superpower. On the other hand, if a blockade were to occur in the Strait even Iran's oil would stagnate. So, the new hostile resolution could be just empty noise.
Still, "just noise" from Iran could do a lot of damage to oil prices. Why does Iran create all these noises, empty or not? Mostly to increase oil prices to sustain oil revenues from China and India. Notwithstanding threats of US sanctions on institutions doing business with Iran and though China and India are actively looking for oil elsewhere, at present, a significant portion of their oil imports comes from Iran. Namely, 10% of India's total crude import and 12% of China's are Iranian (as of June). The higher the prices, the better it is for Iran. Remember the Arab Spring unrest and how Iran, together with Libya, managed to send oil prices to $128 a barrel? In the past, any threats from Iran, even if unfounded, have boosted the oil prices.

If Iran does choke the Strait, How?

Iran can block the narrow waterway by using mines, mini submarines, suicide squads or missile-ladden speedboats. Even one of these is enough to ignite a war in the region. Of course, a head-on confrontation with the US would be nothing short of suicide for Iran. Instead, it will certainly employ "guerrilla warfare", of the same kind it has supported for decades around the world with Hezbollah, Iraqi insurgents and Afghanistan. And the resulting uncertainty brought by the situation will disseminate panic sending oil prices higher. 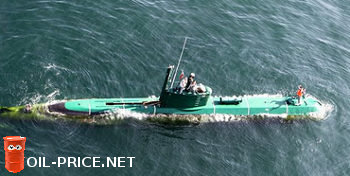 Iran's Ghadir miniature submarines are smaller than some whales and thus a real challenge for sonar systems to discern.

No amount of US warship will prevent insurance companies to raise insurance premiums trough the roof on multi-billion tankers once it is known that Iran is acting with hostility in these waters and this will be enough to send the price of oil up. That's all Iran wants.
A similar situation, the "Tanker War", occurred 30 years ago. In 1984, Iraq attacked Iranian tankers and an oil terminal at Kharg Island. Iran retaliated by attacking Iraqi oil tankers. In what's known as the "Tanker war," the two countries attacked oil ports and oil tankers belonging to the other. The US and the then Soviet Navy entered the fray only in 1987, providing protection for Kuwait ships. US started acting against Iran and relations between the countries deteriorated from then on.

Unlike during the Tanker War, Iran is not in direct war with the US and western world. But it has indirectly been fighting US and western forces by supporting terrorism and Islamic insurgents on the theater of war and sees itself in a holy war against the West. Iran will likely employ the same deceitful tactics in harassing oil tankers and disrupting the distribution of oil. Forget Ideology - Iran needs the money.

Compared to western civilized societies, Iran remains in large an under-developed poverty-stricken nation ruled by ruthless theocrats. Since its non-competitive workforce is not a suitable tax base for its government's hegemonic aspiration, Iran has to rely almost exclusively of oil revenues to finance its government, police, army, hospitals and institutions. Most of its influence on the rest of the Arab worlds, its financial backing of Hezbollah is solely made possible by oil revenues. But cut these oil revenues and the proverbial goose that laid golden eggs is gone; without a market for its oil, Iran will likely face overwhelming domestic unrest leading soon to a civil war.

In fact, the US is all too familiar with the importance of the strait. Consequently plans are underway to develop alternative routes to bypass the strait. With US support UAE opened the new pipeline of Habshan-Fujairah in June 2012. This 220 mile long pipeline with a capacity of 1.5 million barrels a day is designed to bring oil from the UAE and Oman to the Fujairah export terminal, past the Strait of Hormuz. This port is well away from Iranian territorial waters and is guarded by the US fleet so that any possible threat can be addressed decidedly. The Saudi Arabian East-West pipeline from Abqaiq on the Red Sea, is another alternative, though the capacity is much less than the traffic in Strait of Hormuz. Considering that Iran's major clients are in Asia, one alternative is to transport oil through Suez canal. Expensive and dangerous, still a possibility. Iran too is building a new terminal at Bandar Jask in a bid to decrease the over reliance on the said strait. Oil can also be transported via the Iraq-Turkey pipeline. The UAE is also constructing the Abu Dhabi oil Pipeline ending at the port of Fujairah.

Back to the draft bill: According to a top Iranian Naval commander, the country would not close the Strait as it is vital for its economy too. Yet, Iran does have the capability to disturb oil supplies and prices by different threats. This bill could well be the beginning of a formal start to a series.

« Previous
Why Is Gas Price Remaining High When Oil Price Is Going Down?
Next »
North Dakota Oil Boom