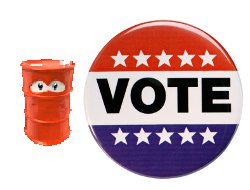 Will Oil Prices Decide the US Elections?

Before jumping into the question, a recap:
In a previous article titled "Is Oil Fueling the Rise in Political Partisanship", Oil-price.net went on a search to see if rising oil prices had any influence on the behavior of American voters in the period between December 1999 and July 2010. We asked: could discontent sparked by an uptick in volatility in oil prices be one reason why American politics of late seems to have gotten so much nastier? We delved into three polls: Presidential approval ratings, the Congressional approval ratings and direct questions to the voters on whether the country was in the "right track" or the "wrong track". What we found, to state the obvious, wasn't very surprising. What was surprising, in fact, was the degree of shifts in the approval rating of the President vis-a-vis oil prices-inversely proportional. As for the question of "Congressional approval" and "Direction of the country", they showed even more impact to the volatile oil prices.

Thus, between 1999 and 2010, oil and politics moved from being indifferent partners to having a burly relationship. Oh, yes, Obama was elected on the back of all-time high oil price volatility from the late Bush era (oil went up to $160 then back down). Even otherwise, you don't need loads of grey cells to make a correlation between high oil prices and slide in the approval ratings of the decision maker. Oil and politics-think of the wars and bloodshed-is welded marriage.

So back to the present scenario. How exactly are we faring? After all, we are bang in the middle of the Presidential campaign. There is no denying the fact that oil prices are higher. As a result, it is nearly impossible to defend against it for a politician, and Republicans are milking it. As it turns out, they are already at it.

Take the captious Romney for instance. He has taken Obama to task for the increase in oil prices, calling for the resignation of, what he has drubbed as, 'gas hike trio'. The trio, Energy secretary Steven Chu, Interior secretary Ken Salazar and Environmental Protection agency Administrator Lisa Jackson are directly responsible for the increase in oil prices, he alleges. Mitt Romney has also accused the President of slowing the domestic energy production. Indeed, Romey wants more land allotted for drilling and less stringent regulation for hydraulic fracturing.

For his part, Newt Gingrich has promised gas for $2.5 a gallon. Both the candidates want more drilling in search of oil-even on pristine forest floors, while the President maintains that rising oil prices have more to do with global market indicators. And, Rick Santorum, rather unsurprisingly, has also blamed Obama for blocking energy production in the US. He also feels high oil prices led to the economic downturn in 2008.

Of course, all Americans, differing only in degrees, feel indignant about the spiralling gas prices. One only has to browse the online forums to see the palpable anger. From accusation of "Obama's wars" to 'Big oil' and 'Big money', Americans have different ideas on the root cause of the price increase. Yes, oil under Obama has had rough days: First the BP disaster which tarnished not just BP, remember? Then subsidies going to solar, away from big oil's pockets; controversy about fracking and water pollution; opposition to ANWR oil drilling. Questions have also been raised on the Keystone XL oil pipeline from Canada's tar sands. Promoted by TransCanada, the pipeline would carry oil from Canada's tar sands to the Gulf of Mexico. This pipeline needs Presidential approval as it passes the international border. Earlier this year, the President rejected the bill, though TransCanada is looking at alternate routes that do not require the state's approval. Romney has questioned promoting alternative energy- like giving a loan of $500 million to Solyndra, the solar panel manufacturer-calling the keystone decision 'bad policy'- Fact: The loan to the solar panel manufacturer was in 2009, while the key stone permit is of recent times. According to the Gallup's annual Environmental survey, 57% are in favour of the pipeline, as opposed to 29% who have other views, while the other 14% was undecided. So, there it goes.

Meanwhile the President says: "Do you think the President of the United States, going into re-election, wants higher gas prices?". Spruced by almost 17% increase in the price, so far, as reported by the AAA, gas prices are an easy way to target the incumbent President.

What's the ground situation, anyway? According to the Gallup's Annual Environmental survey, 56% of Americans believe that the President is doing a good job with regards the environment. However, only 42% had the same optimism about his handling the national energy policy. (In 2004, George W. Bush's were much lower- 41% believed that he was doing a good job of 'making America prosperous as well as protecting the environment', while for his energy policy he clocked a mere 34% support).
White House Press Secretary Jay Carney stated, "if increasing drilling were the answer in the United States to lowering prices at the pump, we would be seeing lower prices at the pump, because under President Obama we have increased significantly domestic oil and gas production. That is a fact."

So who or what drives up the oil prices?

Yes, there is speculation in commodity markets that nudge oil prices higher for no apparent reason. Speculations are so. But Wall Street sharks are only a small reason for the increase in the price of oil.
Increasing demand- according to the latest report from the International Energy Agency, global oil demand is forecast to climb to 89.9 mb/d in 2012, a gain of 0.8 mb/d (or 0.9%) on 2011. Demand is increasing in Asia, in particular in China. Volatile situation in oil producing countries could also lead to increased oil prices- Sudan, Iran, Libya, anyone? This February, global oil supply fell by 200,000 barrels a day, as reported by IEA. And, it's basic Economics, if supply doesn't match demand, even on the basis of imaginary fears, oil prices will move on. Blame the oil driven economy, as well.
And, to be honest here, the oil companies do make more profit than they ought to. Then again, they do need the money to invest in exploration. Wait. If not, one day, oil is going to dry up. And, whoever wants that to happen, please step forward? Further, let's not forget that these companies employ a whole lot of people with generous salaries.

To sum up, the next President will be decided on the basis of oil prices. During his term he will have to contend with increasing oil prices and worsening geopolitical volatility. His 4-year term will be too short to implement any long-term policy likely to affect either. He will also be blamed by the opposition for high oil prices like the current President and the one before him.

« Previous
Iran, Oil and Strait of Hormuz
Next »
Why Is Gas Price Remaining High When Oil Price Is Going Down?