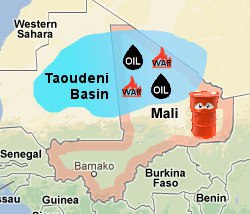 The untold story of Mali and Oil

Mali and oil are as complex as it can get. Though mineral rich, the landlocked country has no- established- oil or gas reserves worth commercial exploitation. Still, the 'unexplored' aspect of the country lends it gravitas as the potential for oil and gas is very promising and could well be a game changer.
Of course, now, the fire is still on and the atmosphere has a definite air of harried complexity. Before looking into the present conflict, an overview of the oil and gas industry in Mali:

The quest for oil in Mali, if you may, began in the early sixties with airborne surveys as the first step in oil exploration. Moderate oil exploration took place in Mali until 1983 when the Taoudeni Basin was declared "burnt out" by the exploration company Esso.

During the seventies and early eighties, more than 9,000 kilometers of exploration through 2D-seismic studies was undertaken in the country. Apart from renewed surveys in Taoudeni basin, there were extensive surveys in Gao Graben basin too. The results were far from satisfactory and when coupled with wide security threats, lack of infrastructure and adverse desert and semi-desert climatic conditions (with temperatures reaching easy levels of 40 to 48 degree celsius or 118 F -ouch), the interest declined. That, however, changed in 2004 with the advent of Baraka Petroleum. Thus, in spite of the ground reality of just five exploratory wells so far, the re-awakened interest in Mali is, in a big way, due to the entry of Baraka Petroleum. With high oil prices and new technical means the bluey oil companies are confident in making a profit when they find oil and gas. Also, an oil pipeline from Chad through Cameroon has increased expectations for a similar pipeline from Mali through Algeria to the market of Europe.

So, there's the promise of potential hydrocarbons in the four sedimentary basins in the country. Though the then Prime Minister of Mali, Cisse Mariam Sidibe, said in 2011 that four countries were 'well advanced' in oil exploration in Mali, it still remains a risk prone venture with only minor oil shows. Basically, it's still pretty much in the realm of assumptions that the country would be able to produce oil and gas for commercial exploitation. On the other hand, the recent studies show geological formations very similar to those oil-producing formations in countries like Algeria, Chad and Sudan.

The four important basins in Mali

If experts are to be believed, you may hear of this basin very soon. Taoudeni Basin is a major geological formation in West Africa spanning Mauritania, Algeria and Mali. Considered as a high potential basin, it is the largest sedimentary basin in NW Africa. In the eighties, a drilling done here managed to penetrate the sedimentary formations to reach potential petroleum systems. In 1982, a well in the basin, Yarba-1, reportedly showed gas, though the subsequent explorations disputed the oil claims. An evaluation in just five blocks of the basin in 2006 held that the blocks could have about 6 MMboe and over 9 Tcf of oil. The seismic data obtained too showed promise for future explorations. Moreover, the infracambrain black shales along the northern margins, and Proterozoic stromatolite beds are expected to hold large amounts of Hyrdocabons. Geologists have noted similarities between the petroleum rich provinces in Algeria, Niger, Sudan and Libya and the Taoudeni basin. The basin has 14 blocks. Since the basin is relatively unexplored, it has added spice to interest of oil companies.

Nara Trough is the most western of the four basins and is supposed to be a sedimentary basin of Mesozoic origin (The Mesozoic age has been proved by wood fossils). Still unexplored, the region has been mapped using gravity and aeromagnetic data suggesting sediments as thick as 14km, similar to the Precaspian basin in Kazakhstan. Also, the cetaceous reservoir found here is similar to the one in Chad and the Paleozoic seems more related to Algeria. Nara Trough includes 7 blocks and all of them have been granted to oil companies. The promising signs: competent TOC of three percent in shale, intracratonic rift/sag basin of 14000m magnetic depth and deep structures still to be measured.

Found in the east of Mali, extending into Niger and Algeria. Here, the Creataceous is Niger like, while the Paleozoic is like those in Libya. Though drilled in 1983, there remain dire needs for further studies in the region. Yet, the presence of oil-prone source rocks promises more investigations in the basin.

Gao Graben, a part of the Central African Rift system extends from Nigeria and Mali in the West to Sudan and Kenya in the East, and while extending into Chad has oil fit for commercial use. One of the wells drilled in this basin turned to be a dry one. Still, 'minor shows' of oil and gas has been found in the basin, and thus, almost 37,500 km2 have come under exploration. (If you are asking, the Creataceous are analogues to those in Chad). Gao Graben has four blocks- 10, 11, 21 and 28. There were minor oil and gas show in the wells. The source rock here is lacustrine Cretaceous shales, while the reservoir rocks are deltaic syn and post. The basin also shows depositional rift sands and fault block traps, all promising signs from an exploratory point of view.

If anything Malians have been clever not only in luring the oil companies but also getting guarantees of minimum investment- the present situation, notwithstanding. There is hunger for oil and Mali offered glimpses of it. As a result, there are big and small companies in Mali with the baggage of huge investment in their search for oil and gas.

In the past, Malaysian company Markmore Group had also applied for blocks 5 and 6 in the Taoudeni. The other companies with interest in Mali include London based Centric Energy (block 7 and 11), Italian company Eni, Canadian oil and gas company, Africa oil corporation as well as Jersey based Heritage Oil. Canadian company Simba Energy has secured oil exploration leases in block 3. The state owned Norwegian company, Statoil has important stakes in the region, also.

Jihadists who overthrew Gaddhafi raided his weapons depots and joined with Al Qaeda. They are now spreading the Islamic revolution in neighboring countries and the relatively peaceful oil-rich north of Mali was a low hanging fruit for them. Indeed, France's intervention to expel Islamists motivated by security as well as Mali's potential resources.

The present conflict began in the summer of last year with the Tuaregs fighting for an independent country in Northern Mali. It gained traction later on with many Islamic militants joining forces to establish a country governed by sharia laws. In fact, the militants do not want to stop with Mali, but are ambitious for a sprawling Islamic Caliphate. Imposing severe Islamic standards the militants severed communication lines and imposed severe punishments for disobedience, interpreting Islamic laws suiting their needs. Should the world have remained mute to the human rights violations in Northern Mali? Don't forget, there were enriched Uranium nearby. France depends on oil and uranium from neighbouring Nigeria and couldn't possibly tolerate Mali to become another Afghanistan. Moreover France and Mali have had a defence agreement in place for years.

Also, after have its military deployed in Afghanistan for over a decade France understandably will do whatever it takes to prevent another Afghanistan to be created within a 2 hour flight. When Malian president requested help from its former colonial master, France obliged, stressing it would be under the UN mandate. And so the French intervened. (And, thanks to the presence of Canadian oil companies in Mali, Canada was one of the first countries to lend a helping hand France.) Further, on January 16, a gas facility in Algeria was attacked by militants. After four days, more than forty oil workers, mainly foreigners, were killed. Allegedly, the militants were the ones fighting previously in Northern Mali.

And guess what: the oil-rich Taoudeni Basin is located at the north, the area seized by islamists. Neo-colonial agenda or not, the fact is that Timbuktu has been wrestled back. Yes, the Islamists could use the time to regroup in the mountains. After all, Islamist fighters are extremely well equipped and funded. In fact they they are known to offer cash for Malian child-soldiers to join them. According to French Intelligence sources they are funded by the oil-rich nation of Qatar which also funds fundamentalists in Egypt, Libya and Tunisia. Moreover, the Qatari influence of Tuareg separatist and other Islamic groups were speculated as early as in June last year. Qatar has vested interest in spreading extreme Islamic Ideology in Africa, not to mention the potential oil and gas resources.

As pointed out in previous articles the Arab spring is nothing more than fundamental Islam's hostile takeover of oil resources, with financial support from theocratic oil-rich nations such as Qatar and Iran. (Many analysts, even those based in Mali, haven't taken the oil potential of Mali under consideration (think Canada, France) and so their analysis have remained over Islam and insurgency, only-you need to know.)

Predictably a confrontation with the West over said resources and fundamental cultural differences was bound to happen. This is likely the start of something bigger, a new world paradigm where former colonial powers return not as oppressors but as liberators and protectors of freedom and liberty.

« Previous
American Oil Revolution
Next »
The Sequester and Oil Prices