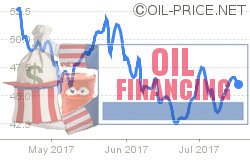 What has led to the low oil prices? Oversupply, increased production or market corrections? We take a look to see beyond the obvious.

Already, crude oil prices are down by well more than 18% compared to early 2017. Oil production has risen in countries like Libya and Nigeria. Quite naturally, with above 'target' production in Saudi Arabia too, oil supply rose by 720,000 barrels a day across the world including 340,000 barrels a day in OPEC countries this June. Global stockpiles remain on the high which makes it easier to reason out the tepid oil prices, we'd say. However, what's the reason for the persistent downward trend of recent months? Often times lower oil prices (always welcome by consumers) are credited with advances in technology. As it turns out, advances in market efficiencies on the finance side are responsible for the recent decline of oil prices below $50.

Up until a few years ago, the world was relying on some very large oil fields for most of its oil supply. Drill in; pump out, as the saying goes. Most of the largest producing conventional oil fields still in use today are in the Middle-East, under the control of OPEC-aligned countries.

Oil was extracted from these fields using "conventional technologies". From a technical standpoint, all conventional fields behave in similar fashion and have a similar depletion rate. In addition, it takes huge investments (sometimes in the billions) to discover and prospect such conventional fields but the bonanza payouts are usually well worth it - especially when oil prices were hovering in the hundred. If you ask, that's because some wells contain billions of barrels of crude oil as reserves. Of course, not all of the reserves can be extracted. That's why oil experts come up with 'potential estimates' while making assessment of wells out of economic necessity. It's these 'proven' oil reserves, in tandem with oil prices, companies work with, as heavily invested projects often take decades to give returns.

Remember we are dealing with variables here, a hugely expensive 'variable' at that. Oil companies spend a lot, in terms of money, manpower, time and energy to receive a future lucrative profit. Put in two penny, take out five. It was rather simple, when you put it so. "Was" is the key here, however. All of this was only possible provided investors were willing to bet large funds on the positive outcome of oil exploration in some less than friendly part of the world. And we know how sustainable that is.

In other terms, there are parts of the world with lots of oil in the ground and what gets it out of the ground is financing. Without financing it will just sit there. For example, Saudi Arabia has proven reserves of about 265 billion barrels or 22 percent of the world's proven reserves. Now, the extraction of these reserves is another ballgame, altogether.

Oil reserves are defined as "the amount of oil that can technically and economically be recovered", as opposed to "oil resources" which denotes the quantity of oil in the ground, regardless of market conditions. So, when you read decline in oil reserves, it doesn't mean that oil evaporates with the downward spiral of prices. Instead, it's just that oil, still in the ground, has become economically unviable to extract when oil prices plunge. And, take a look at the oil price lagging below $50 a barrel. Now, why would anyone finance something providing such meager returns?

Well, today it looks like some of that oil can kiss financing goodbye.

The fact is that because of oil price volatility, the investment world is shying from large funds needed in ambitious projects in favor of more modest fracked wells with a near-immediate production and favorable return on investment (ROI). One, fracking, the technology whereby oil is extracted from shale, has changed the energy landscape of the US. As per our previous article, it has enabled oil production to ramp up by 10% since mid-2016 to 9.34 million barrels a day. Astonishing considering that fracking contributed less than 2% to US oil production in 2000. Secondly, addition of drilling rigs has seen a 24 week of increase with total rig count standing at 763, the highest we've seen since April 2015. With the road still long and unchartered, this is just the tip of the iceberg in the history of shale.

With strong basics, all signs point to the assumption that oil production will continue to surge in the US. We at oil-price.net estimates US crude exports to touch 2.25 million barrels a day in 2020, which will put the US alongside Kuwait and UAE. That is, the production is all set to grow four times the 2016 levels. So, why wouldn't you bet on it? As of now, US exports about 500,000 barrels of oil a day and rising. And the proceeds are usually re-invested or paid out as dividends to investors - in any case turned into something productive, not taxed out to sustain Middle-Easter welfare theocracies. So you will understand how, by contrast, the economic model of Gulf conventional oil resources seems a tad riskier.

Well, it makes economic sense for investors to divert funds from Middle-East exploration to US shores and other regions with an eye on the -better- long term outlook. That they are doing it is something to be taken into account. In fact, this includes not only US and western investors, but also Middle Eastern and Saudi investors.

US, for good measure, has strengthened infrastructure with regards to energy projects. It seems another age when crude oil export was banned in the US. Drifting across the pipelines, shale oil has brought a seismic shift with regards to how we view energy in the US. Shale explains the increased oil production.

Why wouldn't the investors, savvy as they are, sniff up the opportunity out for grabs?

After all, it's common knowledge that smaller incremental investments help hedge risks. Thus the flood of new money into projects with immediate results has resulted in a renewed oversupply of fresh oil from the US. This is why prices declined so significantly.

While US scores with increased rig count and production, the oil industry in the Middle-East is festering with under investment. Said to be in trillions, the lack of investment could boomerang as supply deficit within a decade. Let's not forget that oil exploration is a long term development in which a decade is but short. Why are the investors moving away?

Quite simply western investors are unwilling to invest in the Middle East, a region they increasingly consider an "economic basket case" with a bleak future. Lack of (major) new discoveries, profusion of mature wells, political uncertainties are but some of the reasons. On the flipside, without investment, it's certain that new discoveries would be hard to come by too.

In a smart move, Saudis themselves have been heavily investing in US energy assets rather than developing their own resources. ExxonMobil and Saudi Basic Industries (SABIC) are all set to build a petrochemical project on U.S. Gulf coast. The multibillion dollar investment deal includes an Ethane steam cracker weighing 1.8 million tones and derivative units.

The Blackstone Group's investment is another significant deal. Saudi Arabia has committed $20 billion to a fund created by the Group, Blackstone infrastructure fund - we explained this deal in detail in our previous article. Point to be noted is that the fund's primary investment is in the United States. Safe to say, the Saudis know where to invest in when their domestic market is less than favorable.

How is Saudi Arabia viewing all this? The CEO of Saudi Aramco, Amin Nasser predicts an oil shortage as fall in investment doesn't make up for depletion. Already, most of the Middle Eastern countries are relying on their sovereign wealth funds to tide over the public deficit caused by low oil prices and loss of oil revenues. Indeed, OPEC cut production earlier this year to take on the challenges put up by shale oil. However, with a terrible aftertaste, the move proved futile. Now, OPEC acknowledges demand for its oil to fall by 60,000 barrels a day this year because of shale. Oil, the lifeline of the Middle-East is dealing with existential problems.

The US is winning but can Gulf states stem the loss?

Nasser, the CEO of state owned Oil Company, Saudi Aramco's statement that the lack of investments in conventional oil fields was caused by unconventional oil and gas (read shale) in the market reeks of the pot calling the kettle black. Further, these statements are not helping his company's IPO set for 2018, which could use more help to lure investors. Also, the 85% tax rate to which the state-owned oil company is subjected in Saudi Arabia is a tough sale by all parametres.

In fact the IPO of this trillion-dollar company touted as "the biggest in history" could not have come at a worst time given how the Kingdom has in short order managed to lose control of OPEC. To cut the story short, it was the master plan of Saudi Arabia that forced OPEC to overreact in cutting oil production to boost oil prices that eventually culminated in Saudi Arabia losing market share and clout in OPEC. Lately, Saudi Arabia has even turned against its long-standing ally Qatar too, prompting Qatar to retaliate with damaging revelations on the Saudis' role in funding terrorism in Syria. Not stopping there, the Kingdom is running through its cash reserves while signing 100$ billion in US arms deals. Some calculation.

Investors are dubious about a lot of things when it comes to the IPO. Many analysts doubt whether the IPO is worth the touted $2 trillion. Revenue from Aramco contributes to the operating budget of the Kingdom so investors would be wary of the political ramifications. Aramco's claim to 260 billion barrel of recoverable oil being one of them. But that's not the biggest reason: Saudi investors are also leaving Saudi Arabia to invest in the US petroleum industry instead. This really gives Saudi Aramco the allure of a sinking ship.

The world's biggest crude exporter is conceding ground to enact a steep oil production cut in order to prop up the low global price of oil, causing the Kingdom to rapidly lose market share and influence over other OPEC members.

Back to the question of how Middle-East can tide the loss, it's about going back to the basics. Now that cash is hard on the pocket, the industry has to rethink, grasp and opt for better planning and technology to increase efficiency in each project. Then the familiar story of efficiency leading to profit attracting investors, you know.

As it is, right now, the big money is betting on US fracking instead conventional exploration in Gulf States, and that includes Middle Eastern investors. Since Gulf projects will not be renewed at a sustainable rate, these are long terms changes that are reshaping the industry for good.