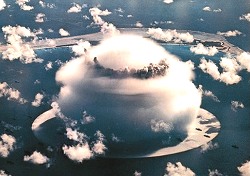 Use nukes to contain the oil spill

The April 20 explosion on the Deepwater Horizon rig not only killed eleven people but also triggered a massive influx of oil into the ocean. President Obama has called the oil spill a "potentially unprecedented environmental disaster." The cause of the explosion is not known and equally obscure and hazy are the means to contain the oil gushing out from the sea floor. Already the south-easterly winds have enabled the oil to touch shore. And, oil prices continue to drop every day on the backdrop of this poisonous spill, possibly the only good news from a consumer point of view.

At present, efforts are on to prevent a re-run of the infamous oil spill caused by Exxon Valdez tanker, when 10.8 million gallons of oil was dumped into Alaska's Prince William Sound in 1989. Usually, a blowout preventer or BOP would shut off any oil leak from open wellheads. It is this valve that prevents blowout accidents due to heavy pressure. In the case of the gulf oil spill, the 450 ton, 48 foot tall BOP failed to stem the flow. BP, the oil company, did try to use robotic submarines to nudge the BOP but the effort was futile and a second BOP could, if it fails, trigger more oil spill.

Recently, the US president opened more than 500,000 square miles of coastal waters in his country for oil exploration. This accident has put that decision on hold. White House adviser David Axelrod said "No additional drilling has been authorised and none will until we find out what happened here and whether there was something unique and preventable here," And, the Governor of California, Arnold Schwarzenegger, even in the midst of a budget crisis, ended his support for oil expansion, while Sarah Palin was still seen sticking to the slogan 'drill baby drill'.

BP in the hot seat

Right now BP is definitely 'Beyond Petroleum' as it tries to stem the oil vent. Without entering into a fault finding mission, suffice to say, BP is in a terribly hot soup. Tony Hayward, chief executive of BP said "We will absolutely be paying for the clean-up operation. There is no doubt about that. It's our responsibility, we accept it fully." Last week, BP was successful in stopping one of the three leaks from the MC252 oil well. However, in a private briefing with congress members, BP is said to have admitted that the spill could touch 40,000 barrels a day if the flow continues. At present, the spill is spewing about 5,000 barrels of oil a day. At stake are environmentally sensitive areas across Louisiana, Mississippi, Alabama and Florida, livelihood of many people in the area and the wildlife with many species of fish, birds and mammals.

For its part, BP finds itself in the same position as David Cameroon was for Avatar, the first to do something without a precedent to follow. But unlike Cameroon, BP has to contend with many more variables- public anger, finding new ways to seal the flow, massive influx of funds running to billions of dollars, and plummeting stock value are just some of them. It is uncertain how long it will take to control the leak with current means used. The technical challenges to stopping this leak with classical means are... namely a lack of classical means. Leaks at that depth rarely occurred before. Human divers can't go that deep. The technology used for leaks occurring in shallow water cannot be used here as the source of the leak lies more than a mile below the water.

High-tech, experimental dome... but will it work?

BP has installed floating booms in the sea and along the coastline to check the oil spill using local fishermen in a program called Vessels of Opportunity. These booms are also used to catch the spills which are then subjected to burning. The plan is to remove the residue of the burn using net and simmers. The company has deployed more than 700,000 feet of the boom with another million feet available for use. Still, boom or sandbags do not work, albeit as a temporary reassurance, as winds damage the booms rendering them useless. BP has also given $25 million block grants to the states affected by the oil spill- Louisiana, Alabama, Mississippi and Florida. The company says the funds were disbursed to implement the Contingency Plans (ACPs) to prevent the spill affecting 'sensitive areas'

In addition, chemical dispersants were also used to check the spill. Thus 160,000 gallons of chemical dispersant called Corexit 9500 were sprayed on the spill and another 6,000 gallons of Corexit EC9527A were pumped directly on the source of the spill below. The dispersants are expected to break the oil droplets into billions of smaller droplets to hasten the degradation process. But concerns remain on the effect of the chemicals on aquatic life, in the short term or long term, as the exact mix used in the chemical is still a well-kept secret.

Against all this, we had untested futuristic technology in the form of giant boxes, four stories high, weighing 100 tonnes, called cofferdams to be placed over the larger of the two leaking wellheads. The idea was to collect the gushing oil leaking from about a mile under the water's surface and channel it through a pipe to the surface to be collected by Transocean's Deepwater Enterprise drillship. The device had been used previously during hurricane Katrina, but then it was in shallow waters and different conditions altogether.

Sure enough, it would be weeks before we know the success of this and none is wiser about the working condition of the dome under high deep sea pressure. Though the dome was successfully placed over the leak, it hit the first problem immediately: Gas hydrates, ice like crystal formed when natural gas and water mix under pressure, sealed the opening of the dome. Thus, the hydrates have plugged the large opening and have prevented oil being funnelled to the ship. So, the dome has been moved to the side of the well for the time being. Now the challenge is to find a ways to overcome the hydrates-either heating the cofferdams or adding methanol. Still at that water pressure -we are talking about pressure at 1,500m below the surface- the funnel would be difficult to maintain. BP is drilling two more relief wells in the area to provide an escape route for the pressurised oil. But that will take months. So what's the solution?

A leading Russian daily has come up with another option-nuke the spill. Though it sounds more like fiction and somewhat outlandish, the fact is that Soviet Russia had used controlled nuclear explosions to contain oil spills, on at least five different occasions.

The science is to drill a hole near the leak, set off the explosion and then seal off the leak-used in the soviet for an oil spill in the desert. If it is rocky surface the explosion would shift the rock which then squeezes the funnel of the well. The first underground nuclear explosion was done in Urt-Bulak in 1966 to control burning gas wells. The success ratio is quite high with only one of them failing to prevent a spill in Kharkov region in 1972.

There is an analogy between using nukes to stop the oil leak and using Chemotherapy on a cancer patient. Chemo nearly kills the patient in order to kill all cancerous cells. Yet it is the best known way to stop cancer. The same goes with using nukes underwater. Like chemo it is drastic yet has a 80% success rate, better than anything else.

Katrina times 10 in the works

"We are continuing to do all we can to stop the flow of oil from the well and also attack and capture the spilled oil offshore," said Tony Hayward. "However, it is also vital that we work together with government and potentially impacted communities to protect the shoreline from any impact of the spill. We hope these grants will support the effective deployment of pre-prepared response plans in each state." Following its involvement with the faulty dam design during Katrina, the Corps understandably errs on the side of caution. Which means trying not to get involved at all.

Hurricane Katrina left Louisiana with unhealed wounds because of a lack of decisive response from the local authority. The same behavioural pattern emerges once again where a disastrous situation is not being addressed promptly and left to worsen. Surely Federal subsidies will shower the coastline of Louisiana and trickle down local pockets after all this oil has damaged the shore and killed most of the wildlife, but at what price?