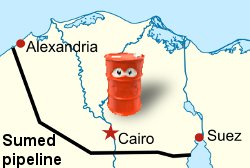 Egypt, much like Iran controls strategic routes in the international oil trade

Go, check the oil prices. Haven't they galloped to $106 a barrel? Indeed they have, on the back of turmoil in Egypt and tensions with regard to the Suez Canal. Not long ago, the uprisings in the Middle-East pushed the price of Brent Crude to over $100 a barrel, just like that. Evidently, notwithstanding sporadic declines, oil prices have shown remarkable resilience boosted by speculative trading in the stock market. And, the story has just begun with Egypt under the spotlight in this saga.

President Mohammed Morsi has been ousted, the army seeks greater control, the tourism sector is in doldrums, foreign currency reserves have fallen and the streets continue to be volatile. But weren't the oil prices climbing even before the crisis in Egypt? After all, tensions in Egypt started well before Hosni Mubarak's expulsion in 2011. Yet, that's how the market behaves. Hang on, before you raise your eyebrows, don't you -often- buy things because they come wrapped in glittery casing? Egypt is a different kettle of fish, just so.

Egypt, as you may have heard, is the second largest natural gas producer and the largest non-OPEC oil producer from Africa. According to EIA, Egypt's total oil production averaged around 710,000 bbl/d in 2011. However, the imports in the energy sector have been increasing due to falling domestic production as well as slowdown in exploration because of the unrest in the country. The weak Egyptian pound has compounded the woes making imports too expensive, even as the country seeks loan from the International Monetary fund. Of course, some of the recent discoveries in Natural Gas could help the fragile energy sector. Yet, the underlying fact remains: Egypt isn't a major oil producer.

Then why are the investors worried?

The answer to the question lies with Suez Canal and the Sumed (Suez-Mediterranean) pipelines- strategic routes for oil shipment of about 3.8 million barrels a day of crude and products from Persian Gulf to Europe.

First, the Suez Canal. Geographically, the busy canal connects the Red Sea and the Gulf of Suez with the Mediterranean Sea, covering almost 120 miles. Petroleum (both crude and refined products) accounted for 15 percent of Suez cargos, measured by cargo tonnage, in 2011, while Liquefied Natural Gas accounted for six percent. An estimated 17,799 ships transited the canal from both directions in 2011(a fall compared to the 35,000 ships in 2009), of which 20 percent were petroleum tankers and 6 percent LNG tankers. Earlier, the canal was unable to handle very large crude carriers. However, the Suez Canal authority extended the depth to 66 feet allowing almost 60 percent of all tankers to pass through.

The Sumed Pipeline is 200 mile long passing through desert and sparsely habited areas. This pipeline is an alternative for cargos too large for the Suez Canal. The two parallel pipelines of 42 inches in diameter have a capacity of about 2.4 million bbl/d. Shipping mainly Saudi and Iraqi oil to European Markets, this pipeline moves the northbound crude from the Red Sea to the Mediterranean Sea, and is a joint venture between Egyptian General Petroleum Corporation (EGPC), Saudi Aramco, Abu Dhabi National Oil Company (ADNOC) and Kuwaiti companies. Recently, Iran was forced to transit about 100,000 barrels a day of oil to Turkey through the Suez canal after a ban on using the Sumed pipeline.

Suez is near cities that have seen major violence in recent years. If there's disruption in the Suez Canal, there goes the Sumed Pipeline. As pointed by IEA, the Sumed pipeline can carry an additional 900,000 barrels a day of capacity, should any disaster strike the Suez Canal. But what the Sumed pipeline were dirupted as well? If so, the oil tankers from the Persian Gulf to Europe would have to travel around the Horn of Africa, adding 6,000 miles / fifteen days to the transit time. Bah!

Together, these concerns and the risk of a full-fledge civil war like in Syria are the main reason for the rapid rise of oil prices. Also, the Egyptian unrest has seriously affected supplies from Libya, Nigeria, Iraq and has also caused temporary disruption to some supply routes within the United States, says the IEA.

Reading into all this, is what worries the people in the Wall Street. Who wants to calculate that only about 2% of the world's oil passes through Suez every day? If you remember, rumors of Iran's threat to close the Strait of Hormuz, a strategic route for almost 20% of the world's (traded) oil, have, in the past, pushed up the oil prices. And looking at history, the Iranian revolution in 1979 pushed prices above $40 per barrel- then. So, as far as the stock market is concerned, future worries on demand and supply disruptions, be they just rumors, matter a lot.

Of course, Egypt with its struggling economy could impose transit fees, or indirect surcharges for revenue which could raise the oil prices even further. Indeed, the Suez Canal authority has raised tolls on the canal in May by two to five percent raking a few billions in the bargain. Another price hike could be counterproductive with declining trade between Asia and Europe.

Cost of stability? 1.3 billion per year

Egypt is the second largest recipient of US military aid (after Israel) with a massive 1.3 billion dollar annually, a whole quarter of Egypt's military budget. As it turned out, raising tariffs by a record 5% on Suez canal fees was one of several career-limiting moves for president Mohammed Morsi who was promptly deposed by the US-funded Egyptian military. Since then the Egyptian military has been in control and ensuring both Suez and Sumed are operational. Mere days following Morsi's demise, Washington promised the delivery of two F-16 jets to the Egyptian military. So in the end, despite the street-level unrest related by the media, oil routes are in reality under friendly military control, a plus for oil price stability. You get the picture.

For the week that went by, crude imports averaged 327,000 barrels a day up by more than 8 million barrels a day. On the other hand, refineries, for the above period, were reportedly running at 92.3 % of capacity with daily input of sixteen million barrels per day. At least for the domestic refining sector in the US, the present is the best time. One reason for the- recent- narrow price difference between WTI and Brent crude oil prices.

Elsewhere, China's manufacturing has reported an eleven month low this month. Analysts fear of a slowdown in Chinese economy with lesser demand for oil. So the latest weak manufacturing data from the Asian Giant is all it prevents the investors from going hunky-dory over the prices. As if they aren't already high, even with record oil production in the US. We hear you.

« Previous
OPEC and oil prices - is the story over?
Next »
Shale: High depletion rates in Bakken