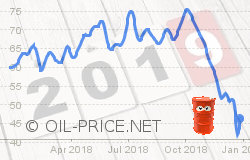 As 2018 downed its curtains, let's take preview of 2019 and what awaits us. We explore everything and everyone associated with oil.

Last year, we gave out five blazing predictions as we stepped into a brand new 2018. And, how did we fare? Well, the year isn't new anymore but we did get 5 out of 5 of our predictions right! Self-congratulations are in order reaffirming why you read us. For 2019, really it's more of the same, but with some caveats. Investors, listen. Readers, pay heed, we are about to deconstruct the next year. As audacious as it sounds, here are our 4 oil price predictions for 2019:

Lower oil prices due to recession

It's no secret that the economy is slowing down after a remarkable uptick in the first quarter of 2018. It's been the same story for oil prices. From a three-year high of $77 per barrel, prices fell below $50 on the back of excess supply and low demand, throwing to dust predictions of oil hitting the $100 mark in 2018.

Not only oil, the slowdown has also seeped into deeper layers. Companies are gaping at dismantlement in tax breaks, tax cuts and low taxes they've enjoyed for quite some time now. Clearly, with the prospect of a steep hike in tariffs, much of the corporate world is hell bent on saving rather than investing for the times ahead. Seriously, can you blame them? With the ongoing trade war with China and ever- increasing borrowing costs, the economy is lot more awash with uncertainty. Frankly, on the global stage itself things are a bit tame with low demand.

For now, it's less growth and more inflation. In fact, anytime the Federal interest rates climb up, the dollar grows stronger. This correlation means cheaper oil in the US but pricier oil overseas. Most economists agree that world economies will slow down in 2019 and this usually means dull oil prices. We have a temporary truce in the form of a ninety day freeze but as the international markets hit a slump, additional levies for goods imported from China threaten to increase the cost of finished products in the US. As a result, investment will lag affecting productivity. Effectively, we'll see tightening and disruptions in the domestic market which grants lower wages for workers. The sentiment floating around is more of a 'let's see what happens' than 'let's spend.'

As for oil, sanctions on Iran were supposed to be an important factor determining the oil prices. However, the markets were shrewd enough to calculate the differences and move ahead. Right now, the slowdown in the economy and the resultant low demand for oil outweighs any other sentiment or concern. Of course, we'll have a flurry of fiscal and monetary measures to brace the slowdown but as for oil let's not forget that US shale oil output is still on record levels with extra healthy inventories. So, any policy level intervention will not energize the oil prices.

There's no beating about the bush on this one, we are indeed gearing up for a slump in 2019. Is that a good thing? Well, in our electronic age, a slowdown in economy entices international capital flow into the US - considered a safe haven - and boosts the value of the dollar. Again, that means cheaper gas at the pump. Not a bad thing, eh? Well, had it been some years ago. You see, when US imported oil, a strong dollar and lower oil prices were a good thing for families and businesses. In addition, low oil prices also propelled the US economy. The story has changed since then. Shale oil has made us the world's largest crude-oil producer this year. When oil prices lag, investment falls too paving way for another slowdown. The only way to combat this development is to be smart and more efficient by removing the tardy infrastructure issues, especially the sub-standard and old pipelines, plaguing the energy sector. That easy? 'That' will take a decade, by our calculation. The way you look at it, at present: Lower oil prices due to recession and recession due to low oil prices. You can have your pick.

The Russian juggernaut has rolled on unimpeded for much of 2018. Will it continue next year as well? In simple terms, yes, yes, yes!

Russia has intensified its efforts to control oil traffic through the black sea since its annexation of Sevastopol in 2014, a strategic port. Russia's recent seizure of Ukrainian ships in international waters off Crimea is a preview of what is going to happen in 2019. Historically, the geostrategic importance of Black Sea can't be underestimated. As the Ottoman Empire weakened in the eighteenth century, Russia's grip over the Black Sea tightened. The saga continued in the ninetieth century with four major conflicts fought along the shores. Come the cold war era, the Soviet Union used Black Sea as a route to the Middle East. Thing is, Black Sea was always 'theirs' even after the wash away of the soviet union.

Evidently, the Black sea is the next strategic frontier for Russia. It borders a significant part of Turkey's coastline, and it lets Russia project its might to Syria which hosts its only Mediterranean naval base. With blatant support for separatists in Georgia and Ukraine, the Russian power is expanding with the annexation of Ukraine's Crimea. Naturally, Russia is alarmed at the influence of NATO in the region. All three states of Turkey, Bulgaria and Romania are part of NATO. And, Russia's Black Sea fleet is ever-expanding with new submarines and air and coastal defense missile systems. For its part, Ukraine has declared martial law all along the Russian border and Black Sea.

With the recent flare-ups, there have been vocal calls for more stringer sanctions on Russia much like the ongoing Iranian ones. Sanctions are okay but the enforcement? No way. Rather the heavens may well come down. Indeed, Russia's stinging belligerence is emboldened by Trump's publicly voiced support and his recent and sudden withdrawal of all US troops from Syria, thus standing down to Russia's assertive presence in the region. Russia is able to curb movement of maritime vessels in the Black Sea as Washington is preoccupied with China and Iran. Russia has already cornered Natural Gas supplies to Western Europe and is building a new pipeline network to bypass rival Ukraine. It has also taken over a number of onshore gas fields in the Black Sea as well as Sea of Azov belonging to Ukraine. Together, estimates put at the gas drawn to 7.2 billion cubic metres since the annexation of Crimea. Effectively, Putin is being given Black Sea on a platter. Can he be curbed? Hell, yeah. What will hurt him the most is if Germany suspends the Nord Stream 2 pipeline from Russia to Germany. The pipeline bypasses Ukraine bolstering the energy security of Russia. If the Nord stream 2 is suspended, it would smart and how.

As far as oil is concerned, Russia's alliance with OPEC has proven fruitful. Though not a member of OPEC, Russia's influence on the cartel is often much more than those of member states like Venezuela and Kuwait. Recently, Qatar's exit from OPEC was not only in opposition to the Saudi dominance but also due to Russia cobbling together muscled influence much beyond its usual reach. With Saudi Arabia's international reputation stained by the murder of a journalist, Jamal Khashoggi, Russia will wait no time to jump to the occasion and attempt to displace Saudi Arabia as the leader of oil-producing nations, giving Saudi Arabia the back seat in quota negotiations. 2019 will see an increase in this dominance.

Natural Gas is all the rage

LNG-powered vehicles have been on a steady increase over the last few years and 2019 may well be the year of liquefied Natural Gas. The global demand for LPG is showing a gradual, simmering increase. Deservedly, LNG is getting its moment in the limelight and you'll hear of it more as the months press ahead in 2019.

Presently, financing structures are in place for leasing commercial LNG vehicles such as semi-trucks or buses at a preferential rate over diesel. LNG is cleaner than diesel and most diesel engines, as it turns out, can be converted to LNG. LNG is now a norm for public transportation in metropolitan areas where pollution is a concern. Finally, LNG is cheaper than gas or diesel. And the aforementioned financing structures will make it far more attractive for businesses to buy into LNG-powered vehicles.

From 183.9 billion cubic feet (bcf) in 2016, the US has moved on to become one of the fastest growing exporters of LNG with $3.3 billion worth of 706.4 bcf in 2017. At this rate, the US is on track to become the world's largest LNG exporter-by capacity next year. With increased demand from Asia, talks are on for several new LNG export terminals in the US as part of the second wave of LNG projects. LNG is one area that is potentially a gold mine for investments in 2019. Say, the $43 billion Alaska LNG project is worth an eye on. When levied, the 10 - 25 percent tariffs on China export may lag the industry for a brief period but the fundamentals are strong enough for a bounce back. Anyway, why slay the golden egg President Trump? LNG is here to stay and prosper. Let it.

Also electric vehicles - despite much press - are not breaking into the commercial market and this will help LNG, out of emissions concern gain market share as a happy medium until electric commercial vehicles are more economical sometime in the future. LNG is viable and here, and the public is ready for it. 2019 will be the year of LNG.

It's no secret that solar, wind and hydroelectric energy production have been competitive with fossil fuels for several years. That changed as the Trump administration imposed a thirty percent tax on imported solar panels, suggested a two-third cut reduction in the funding on the energy department's programs on clean fuels, proposed credits for renewable energy, dumped the previous administration's Clean Power Plan and left the 2015 Paris agreement in 2017. (Comprehensive or what?) Of late, there have been reports of the administration ending subsidies for electric cars and other renewable energy products as early as 2020.

For the year 2019, the administration is expected to propose a steeper cut to the office of Energy Efficiency and Renewable Energy (EERE) which will be a heavy blow for renewable energy. In fact, these are on expected lines as President Trump called the climate change a hoax much before running for office. The almost illogical love for fossil fuels, on the other hand, has been overt with both natural gas and 'clean coal' enjoying star status.

Naturally, lower fossil fuel prices (oil and natural gas) for 2019, combined with fewer subsidies by an administration adverse to alternative energies will throw a wrench into the economics of it all. Electricity from the sprawling renewable resources may eventually recover but definitely not in 2019.

2019 may have few more surprises up its sleeve, if not what's the fun, right? That said, for the consumer in the US, 2019 will be a better year with cheaper gas at the pump. (Exempting a war with China, of course.) You'll also see the emergence of Natural gas as an enticing investment option. Russia will continue its dominance in the oil market to eclipse Saudi Arabia, the repercussions of which will be felt on the world stage. . And oil in the US will continue to prosper. That's for now. Happy? After all, we've delineated these four predictions so that you can invest where you deem fit. From all of us here at oil-price.net, have a wonderful 2019!