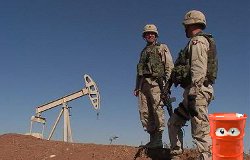 An energy war seems to have already begun and as the world's limited oil reserves are getting depleted, the warlike situation will further worsen in the foreseeable future.

Can the World Survive the Impending Oil Crisis?

The alarm bells have started ringing as surveys indicate that oil will become increasingly scarce beyond 2030 at the present rate of consumption. And to imagine a world bereft of adequate oil is simply bewildering. Oil explorations are going on all over the world and there appears to be some small pockets of suspected oil reserves, but these constitute only a fraction of the quantum needed to offset the anticipated shortages.

The signs are ominous, and if appropriate remedial measures are not immediately put in place, it is almost a certainty that by the end of 2020 most nations around the world will have to make do with less and less oil. An energy war seems to have already begun and as the world's limited oil reserves are getting depleted, the warlike situation will further worsen in the foreseeable future.

In such predicament all nations will have to toe the political ideology of the Arab nations or else face oil starvation. The United States and the other developed nations that form the G-8 group will cease to wield the power it now enjoys.

The military might of a nation will become inconsequential as military equipment, fighter planes and war machinery will be of no avail without fuel. It is only the oil-rich nations that will exercise hegemony.

The premature release of Lockerbie bomber from prison is a case in point. Libyan intelligence officer Abdel Basset al-Megrahi was the lone person sentenced to a jail term of 27 years for mid-air bombing of Pan Am flight 103 over Lockerbie, Scotland. Megrahi was set free in August, 2009 on compassionate grounds after medical reports confirmed he was suffering terminal prostate cancer - although he is still alive and living in Tripoli. The plain truth is, his release was a pre-requisite for British Petroleum to finalize an oil contract with the Libyan government.

Economists predict that the "peak oil" will dramatically alter the fortunes of many developing countries. The term "peak oil" has been coined by oil experts to signify the point in time when the world's oil reserves will reach their peak production and the oil production thereafter will commence its downturn journey. This will mark the supply crisis -- and the resultant panic can trigger volatility in commodity markets as well as stock exchanges.

More and more oil-producing nations are rapidly nearing peak oil (maximum production) stage and the situation is indeed becoming grim. From thereon, oil production will steadily decline while the demand will constantly escalate. The gap between supply and demand will widen leading to soaring prices that most nations cannot afford.

All manufactured goods (whether made with or without the use of oil) will become prohibitively costly as the transportation costs, whatever the mode, will sky-rocket.

As consumers will not be able to pay higher prices for agricultural as well as industrial products, there will be economic stagnation. Employers will resort to layoffs and unemployment problem will become more acute and many people may lose their homes and hearth.

The situation can lead public outrage and civil wars in many nations and the crime rate will escalate and the one possible outcome will be derailing of democratically elected governments and imposition of martial law in many countries.

It has to be understood that peak oil crisis does not merely signal the inadequacy of oil but more the social and economic malaise the world will be subjected to. The comity of world nations must devise ways to confront the dangerous situation and for this, every nation must wake up to the enormity of the problem and try to grapple with the grim realities.

Having first-hand knowledge of the ground realities is a basic pre-requisite for nations to chalk out meaningful solutions. It is learnt that some European nations including France, Germany and the United Kingdom have woken up to the imminent catastrophe and are secretly gearing up to face the situation.

Technological innovations are the dire need of the hour for developing fuel energy alternatives. But one cannot lose sight of the current prices of oil, and the heavy investments already made in infrastructural facilities - like oil extraction, running of pipelines, oil refining, and oil distribution set-up.

America possesses the technology to harness solar energy. American solar energy would be economical as also renewable. For a startup, the initial hardware and other infrastructure has to be publicly subsidized.

Hydrogen can prove an excellent universal fuel to power automobiles, planes, trains, and ships. It can also heat residences and commercial buildings and generate electricity. A nation that succeeds in converting all power systems to run on hydrogen will cease to depend on oil. In fact, hydrogen can be synthesized from different sources of energy - that include nuclear, geothermal, biomass, wind and solar.

Scientists argue that the sole energy efficient source available is Nuclear, which can comfortably meet all requirements of the future. The biggest problem can be the safety issue. Otherwise, there can be no doubt that an investment in safe nuclear energy must be the right solution for all energy woes.

To sum up, it may be said that the answer to oil alternative is to be found in several other energy sources like solar energy, hydrogen storage, coal, carbon dioxide capture, synthetic fuels, the controversial ethanol and - last but high in priority list - nuclear power. If timely measures are not taken to defuse the oil crisis, the entire world will face increasing ideological pressures from Arab/Islamic oil-producing nations.