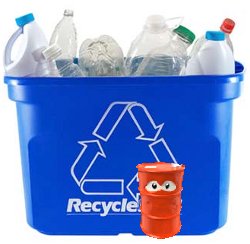 An inovative method allows conversion of plastics back into oil

Though plastic is one of the most versatile synthetically produced materials in the world, it also is one of the environmentally unfriendly substances produced by man. And considering its utility in myriad of industries and life spheres, it is impossible to give up plastic all together. Plastic has been charged guilty on several accounts, but the ones that strain the already depleting resources are - the manner in which it is disposed and the production process. Consider this - a single plastic bottle takes about 1,000 years to break down completely.

What however is more worrisome is the fact that plastic unlike other materials cannot be recycled easily. Typically manufactured from petroleum, it is said that about 7 percent of the entire world's oil production in a year is used for plastic manufacturing. This is higher than the oil consumption of Africa. As plastic's recycle rate around the globe is dismally low, its carbon footprint includes incineration and land filling. Plastic trash is also causing heavy pollution on beaches and oceans around the world. Tons of plastic from Japan and US is left afloat in the Pacific Ocean, which is endangering marine life significantly.

Thanks to the people who sincerely appreciate the higher energy value of plastic, the world now has a splendid invention that can convert plastic back to oil. Akinori Ito, CEO, Blest, a Japanese company has invented a safe and user friendly machine to carry out this conversion. The machine is effective in recycling different kinds of plastic into oil. According to the data released by Plastic Waste Management Institute - Effective Utilization doesn't just take into account the 20 percent of recycled plastic. But it also considers the incinerated 52 percent used for energy recovery like generating electric power or heat. Akinori Ito says "If we burn the plastic, we generate toxins and a large amount of CO2. If we convert it into oil, we prohibit CO2 production and at the same time, increase people's awareness about the value of plastic garbage".

Since the machine employs an electric heater that controls temperature instead of flame, the conversion technology is quite safe. The machines are capable of recycling polystyrene, polyethylene and polypropylene of numbers 2 to 4. PET bottles that fall under number 1 polypropylene, however, cannot be processed. As a result, a crude gas is obtained that can be effectively used to fuel stoves or generators. After refinement, it can even be used to fuel motorbike, boat or a car. One kilogram of plastic using 1 kilowatt of electricity is capable of producing 1 liter of oil. This approximately costs 20 cents.

Blest manufactures these machines in different sizes and so far had installed them at 60 places including fisheries, farms, small factories of Japan and abroad. "To make a machine that anyone can use is my dream," says Ito. "The home is the oil field of the future." Considering the fact that 30 percent of waste Japanese in a household is plastic -- majority of it coming from packaging -- Ito's statement is definitely not as crazy as it seems. At present, the smallest version of the machine is priced at $9,500. The company is constantly honing its technology and looking forward to achieve a product that can be made available in poorest nations of the world.

Changing the Way We Think

It is the educational aspect of this invention that Ito is more passionate about. On many occasions, he has taken the model on planes to Marshall Islands. There, he worked in conjunction with the schools and local government to educate people about the culture of recycling and the great value of useless plastic. Ito did it as a part of a project he took up a few years back. The program succeeded and it also offered a practical solution to get rid of plastics left by tourists. The oil manufactured was used for running boats and tourist buses.

According to Ito, introducing this concept to school children, their parents and teachers is his most important work. In Japan he demonstrates to them how drinking straws and packaging left over after lunch could be recycled. He also adds that if we were to use oil only from the plastic rather than oil fields, the world's CO2 emission could be dramatically slashed. He sarcastically questions the world "Its waste, isn't it?, "This plastic is everywhere in the world and everyone throws it away."

Oil can be extracted from this fine grained, organic rich, sedimentary rock through pyrolysis, thermal dissolution or hyderogentation. Shale contains high concentrations of organic chemical compounds known as Kerogen. From this solid mixture, oil is extracted through chemical process. Shale can be effective converted into combustible oil shale gas and liquid hydrocarbons (shale oil). Global deposits of Shale are estimated to be around 2.8 trillion to 3.3 trillion barrels of restorable oil. Planet earth is blessed with about 600 known oil shale deposits, most of which is found in United States of America. Although several countries have oil hale deposits, known deposits of economic importance is found only in 33 countries.

Natural gas obtained through tight sands can be considered conventional natural gas produced from unconventional reservoirs. The flow rate of this kind of sand makes the oil extraction uneconomical as niche technologies need to be employed to create the unconventional resource. Assistance from US Department of energy and research projects has resulted in advancement of technology to develop and recover this unconventionally produced gas.

« Previous
The Mumbai Oil Spill
Next »
Can the World Survive the Impending Oil Crisis?