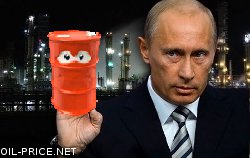 Oil prices are always experiencing a little fluctuation. In the past few years, there have quite a few sudden rises in oil prices with a subsequent fall in the stock market. The London Brent has shown a rise above the coveted $110 a barrel mark for the first time in February 2011 after 2008. This time around, no one is too shocked. Global political instability has caused these gruesome ups and downs in stock and oil prices. While it isn't a strange scenario, many companies and countries are ruing the day they started depending on Middle Eastern countries for all their fuel needs.

While most companies are mourning and looking for a way out, one giant publicly traded Russian gas producer Surgutneftegaz "Surgut" [SGTZY] is at the pinnacle of its achievement. The planets are all lining up for Surgut as attention moves to more trustworthy sources of oil and the chain of events couldn't be any better.

The 'Jasmine Revolution' of Tunisia is making all the authoritarian regimes in the Middle East quiver in their boots. After the success of Egypt and the stepping down of Hosni Mubarak, Libya is standing at the helm. Gaddafi refuses to be as easily dismissed though and vows to take the country down with him. It is clear for all to see that the situation in the Middle East will be getting a lot worse before it gets any better, if it does. Most of the OECD countries rely on the Middle Eastern nations for most of their fuel needs. They will be in a lurch when matters get worse, if they do not find a trustworthy alternative source of fuel.

With the way the political instability is spreading in the Middle East, no one will be too surprised to see it reaching Saudi Arabia. Analysts claim that if this untoward scenario comes about, oil prices will be expected to reach $200 per barrel!

In the current scenario, Italy is one of the countries that will fare badly. Italy is the largest importer of Libyan oil receives 28% of Lybia's production. Ranked 12th oil exporter worldwide, Libya is also the African country with the largest proven reserves at 46.4 billion barrels. Furthermore Lybia accounts for a full 2% of the world's oil production. Countries like Ireland and Italy will suffer greatly due to these crisis situations if some or all of Libya's oil is taken off the market.

Gaddafi, like Saddam Hussein, has covertly decided to burn down the nation's oil pipeline. Who can forget the quagmire the world was in when Saddam burnt more than one billion barrels of crude oil while leaving Kuwait. The fires lasted all of nine months and caused much destruction to life, property and the environment. Something like this happening again is a scary prospect for former colonial powers like France and England as they depend too much on oil from the Middle East. With the rising oil prices and uncertainty of supply, most countries will be less keen on investing their money in the Middle Eastern countries. Diversifying their supplies to more logical and viable options like Russia becomes inevitable as a national security option.

The Russian Federation supplies almost 65% of the European Union's energy needs through oil and natural gas exports. Owing to the fact that Russian oil & gas pipelines are state owned and have been used as political leverage in the past, Europe and other nations were of the opinion that Russian is not a reliable source of oil. This point of view has been undergoing a paradigm shift due to the Middle East woes and steps taken by the Prime Minister of Russia, Vladimir Putin himself.

For the longest time Gazprom, Russia's number one oil & gas producer has held monopoly over market and infrastructure, hindering the growth of other Russian oil majors and concerning Wester European nations who perceive Gazprom as a remnant of the cold war era. In February 2011, Putin has set the ball rolling and Gazprom will now have to open their gas pipelines to competitors like Rosneft, Novatek and one of the largest oil producers in the country, Surgutneftegaz. Once this is accomplished, dependence on the Kremlin will ease making Russia the best option for the world to rely on. Middle Eastern Islamic nations are no longer the world's best bet. The ways of capitalism and matters of national security are suggesting a move to greener pastures, which is Russia right now.

The Russian oil producer best placed to benefit from all these changes is Surgutneftegaz . Surgutneftegaz owns one of the largest oil refineries in Russia, in Kirishi and is responsible for producing more than 13% of the country's crude oil. Surgutneftegaz is also first in line to access the opened pipelines and foreign markets, and stands to increase its domestic gas productions from the existent 25% of all oil companies thanks to its $30 billion cash in the bank. Being in the Kremlin's (and Putin's) good books did not hurt either when the pipeline deal got inked. While Surgutneftegaz' reserves are outstanding at 18.2 billion barrels, the company had a tough time with distribution. This is to alter soon with all the revolutionary changes being brought about in the Russian oil industry so as to attract European attention and maintain credibility and trust. At current levels the stock prices of Surgutneftegaz [SGTZY] is extremely underpriced given the company's predictable surge in revenue when the reach of its abundant gas reserves is extended to global markets via Gazprom's existing pipeline. Surgutneftegaz' stock is expected to trade at several multiples of what it is at currently.

With more and more private Russian oil giants getting linked to the oil and gas pipelines to Europe, the Russian oil industry will predictably continue its upward trend. Earlier this week, French giant Total [TOT] bought a 12% in Russia's number one gas supplier Novatek as a strategic partnership. The keyword here is 'strategic'. The booming Russian oil industry will prove to be divine succor for all European nations as they no longer want to depend on the unstable and hostile mini-Iran countries for their fuel needs.