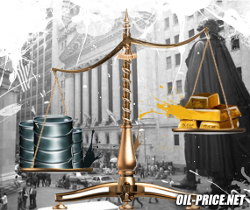 Could Oil be a safer investment than Gold?

How many people around the world with money to invest are going to continue to fall for the advice of so called experts calling for them to invest in gold?

Everyday, newspaper and television advertisements are enticing people to invest their capital in gold. They are backing up their advice with claims that investing in gold will safeguard their capital from high inflation. They also go further by telling prospective investors that investing in gold will protect their money and savings from turbulence in the world economy.

Unfortunately, a number of people are falling for this advice and are investing their money in gold without actually calculating the risks, and it must be said that there is now more risk than previously in using gold as an investment strategy. One of the main risks is the mind boggling amount of fake gold bars circulating. As reported by our partner site Gold-Quote.net, number of governments worldwide have been secretly carrying out audits of their gold reserves due to the fact that trading in fake gold has become a major criminal activity. The Chinese government has actually recalled its gold reserves being held by the Bank of England. However, ironically it is also a Chinese company which has been advertising the fact that they manufacture and sell fake gold based on an alloy known as tungsten. Their website, Chinatungsten Online, actually quotes the following, 'We are well accustomed to exploit more innovative applications of tungsten products. Gold plated tungsten is one of our main products.'

It is no surprise that the Chinese may be at the forefront of criminal activity involving gold, as approximately sixty percent of the world's supply of tungsten ore is mined in China. Tungsten is a dream product for those who wish to make a profit from scams involving fake gold. While gold's density is 19.3 g/cm3, tungsten's density is 19.25 g/cm3, only 0.26% lower and given any practical measurements this difference is impossible to discern.

Counterfeiters manufacture fake $480,000 400oz gold bars as follows: a brick of tungsten is cast, and a thick layer of gold is deposited via electrolysis, sealing all the edges and covering the whole surface. Although these gold bars resemble gold and contain on the surface approximately $50,000 worth of gold, they are not gold, and those that have mistakenly invested in tungsten filled bars or coins, thinking that it is a safe and lucrative investment, have been in for a nasty surprise.

But the Chinese are not the only culprits, in October 2009, it transpired that there were tungsten-filled gold bars in the gold reserve held in Hong Kong... shipped from the USA. In the past number of years, some UK based investment banks have actually pulled out of trading in gold commodities due to their concerns regarding the amount of fake gold circulating.

Criminals that are manufacturing and selling fake gold have been using such sophisticated methods, that even seasoned experts have been fooled. A number of US citizens have actually been calling for an audit of the Federal Reserves. One of the problems with identifying fake tungsten filled gold, is that it can only be detected by drilling the bar.

When there are concerns about fake gold in such world renowned banking institutions as the Bank of England and the US Federal Reserves, there can be little doubt that the criminals, trading this gold, have been helped along the way by insiders working in these institutions. There is so much red tape involved with these banking institutions that it is impossible fake gold would have been able to infiltrate their vaults without help from insiders.

Whereas there is no doubt that real gold is valuable, it is no longer the safe investment that it once was. Rumours which are currently circulating that GLD EFT very likely holds tungsten counterfeit bars among its 1117 metric tons make frightening reading. This is more gold than the central banks of China, Switzerland, Japan and Europe put together. A large number of Investment strategists are now convinced of the fact that investing in oil is a safer and more lucrative investment strategy than investing in gold. Our studies show that this view is certainly correct. No one wants to make counterfeit oil, as there is no money in it.

There is simply no substance known to man that produces as much energy per liter for as cheap as oil. Any attempt to make "counterfeit" oil, to manufacture such potent combustible material is guaranteed to cost more, a losing business proposition. So oil is counterfeit-proof because it is... cheap. On the other side crooks will always attempt to counterfeit gold and may turn a profit because it is... expensive (gold costs close to $1,200/oz today)and there are cheaper materials out there such as tungsten (only $20/lb) and "proven" modern manufacturing technologies that make counterfeited gold impossible to detect.

As a result of the high amount of criminal activity now involved in the gold commodities market, anyone who invests in gold is taking the risk that some of the gold they purchase, whether they physically hold it or not, may include fake gold.

You're better off owning crude oil.

« Previous
How will the Dubai crisis affect oil prices?
Next »
Oil Drilling - an Expensive Business