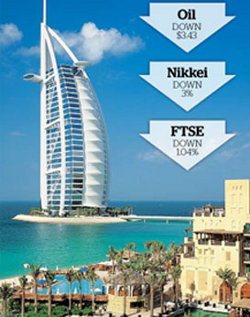 Oil prices take a dive as the Dubai crisis unrolls.

How will the Dubai crisis affect oil prices?

Dubai, the land of luxury is one of the seven states in the UAE. Its property boom grew at a frenzied pace, piling up debt but also building dream projects like the Palm shaped islands, a new urban metro, the world's largest tower, a waterfront to the size of Hong Kong, a leisure park called 'Dubailand' and more. The now infamous 'Dubai World' has stakes in holdings around the world from New York to Las Vegas. Many business enterprises from Iran, India, Pakistan, and within the Arab world flocked to Dubai to do business due to the liberal policies and incredible returns.

Now, many of the works have come to a standstill and Dubai is seeking a bailout from Abu Dhabi another of the seven states in the UAE. The crisis could end if Abu Dhabi helps. But Abu Dhabi, guessing from the initial reaction will not cover for the debts completely but rather "look into each case on its own".

Critically, this crisis comes at a time when the world economy was recovering from the financial crisis. Needless to say, markets around the world tumbled on hearing the news-stock markets in London, Asia, New York, Hong Kong and South Korea fell. Construction companies from Australia, Japan, South Korea involved in Dubai were affected because of their presence in Dubai. Banks like HSBC, Royal Bank of Scotland and Standard Chartered could lose because of their substantial operation in the Middle East and understandably their shares have fallen since.

Of course, the oil prices fell immediately. On November 27, the January contract for benchmark US light sweet crude slid to $76.05/bbl, a decline of 1.91, and the February contract dropped to $77.36/bbl, declining by $1.83, this after the thanksgiving holiday on Thursday (November 26). In London, though the January delivery of Brent crude dropped on Thursday (November 26), it gained nineteen cents closing at $77.18 in the ICE Futures exchange.
For a bit of background, Dubai's oil reached its peak in the eighties. The country has only two percent (at about 80,000 barrels a day now) of the about 98.2 billion barrels of UAE's oil, and oil contributes to less than six percent of its economy. Dubai became a wall street of the Middle East to diversify away from oil since their reserves were getting exhausted. It wanted and almost succeeded in becoming the service centre of the world. But real estate proved to be a sore point, and analysts believe that the correction had to happen as the debts were hovering dangerously.
Against this backdrop comes the scheduled meeting of OPEC in Luanda on December 22, where discussion on prices and output quotas would take place. OPEC contributes about forty percent of word's oil. The last meeting of OPEC saw the cartel leavings its production quotas unchanged. Would there be any change this time?
The signs point otherwise; some of the rhetoric:
"Given the circumstances, there will not be an output increase and OPEC will not permit members to do it," Iran's Oil Minister Masoud Mirkazemi said at a press conference, "These days the market situation is not right to raise output. This is my forecast" he added. Venezuela which has a quota of 24.84 million barrels per day is also expected to maintain the same production level. Kuwaiti Oil Minister Sheikh Ahmad al-Abdullah al-Sabah said "The oil prices at $75-80 per barrel are good and acceptable". Iran, the second largest oil producer in OPEC, has said that his country didn't expect the oil cartel to increase output.

Possible effects of the crisis on Oil

In winter, as often is the case, the oil prices go northward but this time around oil prices may slide. Of course there are many voices trying to play down the effects of the crisis. The British Prime Minster, Gordon Brown said that the Dubai crisis will not cause major damage to world economy. "My own view is the world financial system is stronger now and able to deal with the problems that arise," said Brown. Finance Minister Yuval Steinitz said that he also forecasts only minor effects, if any, on the Israeli economy from the Dubai crisis.
Fine, the oil prices did bounce back the next week, but it came on the backdrop of the standoff between Iran which detained five British soldiers (since been released from custody). So, oil prices recovered as investors feared a standoff between the crude exporter and western powers. And also, Pirates seized a tanker carrying crude oil from Saudi Arabia to the US.
There will be demand from China, India, Russia and Brazil. In fact it's, at least, a cover for China to buy oil and gold as there is a need to invest in oil and other resources needed for the growing economy. As most of the $2.27 trillion in foreign exchange reserves have been held in dollar-linked U.S treasuries, it poses a high risk as they don't have stable value like oil and gold. Economic Information Daily from China published comments of Ji Xiaonan, Chairman of the Supervisory Committee saying that Dubai's debt crisis could be a good opportunity for China to purchase gold and oil assets. Ji Xiaonan was quoted as saying that the Dubai debt crisis "could give China an opportunity to put some of its foreign exchange reserves into gold or oil".
Yet, not to forget, the investor confidence is low while the anxiety is more, as the markets-commodities as well as equities- believe there is more chances of Dubai defaulting on its other debts. Yes, outside the Middle East Dubai does not, indeed, have that much influence but this could be the beginning of further defaults. For instance, countries like Bulgaria, Hungary and the Baltic states of Latvia, Lithuania and Estonia have debts exceeding their GDP (Gross Domestic Products).
Since there is still a big black hole in investor confidence, demand may not rise in the immediate future. Furthermore, banks may tighten their lending for investors and investments are a huge risk in the real estate sector. As of today, no one is able to predict the impact on the banking sector. A report in Sucden Financial Research said "It should be noted that fundamentals remain weak, as current above-average temperatures raise concerns for oil demand levels in the US".
Analyst in KBC market services, a division of KBC Process Technology Ltd. in the UK, have this to say, "We keep making the point that for the developed economies there is little sign that demand is improving - yet. Everybody talks about demand recovery but lift-off keeps being postponed."

Remember, Dubai has already achieved its peak in oil and it will be hard to raise capital with knowingly depleted oil wells. This crisis is a setback pushing them to rely more on oil revenue. They will have to pump more oil out to finance their debt. And, as OPEC is not expected to increase the production quotas, expect oil prices to go even lower.

« Previous
International Energy Agency: Capitulation to Peak Oil?
Next »
Could Oil be a safer investment than Gold?