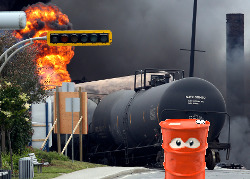 Train wagons are not a viable oil pipeline on wheels.

The much ballyhooed story of energy independence in the US is almost here, thanks to shale oil production from Texas and North Dakota. Also in the picture, there's the growing production from Canadian oil sands. From being hugely dependent on overseas supply, the US has come a long as it sources almost 66 percent of its crude oil from North America itself. The International Energy Agency (IEA) predicts that the US will displace Saudi Arabia and Russia as the world's largest oil producer by 2015. This is mainly because of the Bakken Fields in North Dakota and Montana and Eagle Ford and Permian Basins in Texas. In particular, North Dakota's oil production has increased by more than fivefold in the past five years. Irrevocable scenario? Not by any means, entwined as oil is with depleting natural resources. But for now, there's the pressing concern of infrastructure woes in transporting oil warping the US.

Enfeebled by infrastructure problems with languid pipeline facilities to match the growing supplies, oil producers did have an option handy- rail transportation. Oil transport by rail is in tandem faster, efficient, and more flexible. According to the Association of American Railroads (AAR) U.S. freight railroads have carried 407,642 carloads of crude for the year 2013, about 74 percent increase from 2012 levels. According to rail industry officials, crude imports from Canada through rail have also increased by over 20 fold since 2011. According sources from AAR, transport of oil by rail has increased by 443% in the US.

The records, though, may be in for a tumble as rail safety regulations are up for review due to safety concerns. Not for no reason. Fear about transport of crude via train increased with four oil train explosions in the US and Canada. In particular, the Lac Megantic accident where a train carrying crude derailed and exploded killing about 50 people raised the red flag about rail safety. Of course, there were many more minor oil spills hardly mentioned in the media -from 9 in 2010 to 108 in 2013.

Though rails spill less crude per ton-mile transport than other land transportation, much like how the EXXon Valdez spill resulted in an overhaul of transport of oil by sea, the Lac-Megantic disaster has prompted cries for more regulation of oil by rail. In Albany, for instance, 150,000 barrels of Crude from Bakken arrive everyday by rail but the State's Department of Environmental Conservation has put under review all permits granted for oil transport via rail in the state.

And, in the US any such regulations has to come from Department of Transportation (DOT). As it is, Department of Transportation has, in fact, already sent a draft rail safety regulation to the White House of Management and Budget which prompted a tongue in cheek response from API President and CEO Jack Gerard "that new regulations be supported by hard data that will help improve the 99.997 percent safety record for transporting crude oil by rail."

Oil independence aside, the US has just woken up to the news that North Dakota's oil is very explosive. The U.S. Department of Transportation has issued a safety alert warning that the crude from Bakken could be more flammable than traditional heavy crude oil. This is because oil from Bakken formation is said to contain higher levels of flammable gases including Methane and Propane which are hard to put out too. The DOT has qualified the Bakken crude as 'dangerous' subject to extra precautions.

Fact still remains that almost all of the 1 million barrels of oil transported by rail across the US everyday come from North Dakota's Shale region. According to a report from the American Fuel & Petrochemical Manufacturers, Bakken oil is safe and within the safety standards for current rail car designs. Testing 1,400 samples of Bakken crude for volatility, the findings concluded that Bakken crudes are within pressure, flashpoint, boiling point and corrosivity standard for use in rail cars.

Not long ago, the refineries in the East Coast lacked pipelines for oil transport, relying on oil from Africa and the Middle East. When the price of imported crude were higher than the domestic crude, the East Coast refiners just made it through the scraps while the Midwestern refineries enjoyed clean profit. What changed the game was Bakken oil reaching East through rail. If oil through rail transport is banned, these refineries will suffer more.
And, if indeed oil transport by rail faces more bottlenecks, how will oil be transported? Where are the pipelines?

Lifting of the export ban

Meanwhile, the White House is also contemplating the export ban on crude oil on the back of the shale oil boom. Because of a legislation passed in 1975, exporting crude produced in the country is banned for export except to Canada- with the condition that the oil isn't re-exported.(Export of refined petroleum products, like gasoline and diesel, is permitted.) With the surge in production of domestic crude, it's indeed time to revisit an archaic legislation.

Shale oil produced in the US is light with low-sulphur content. This crude is a mis-match for the refineries in the Gulf of Mexico which are more suited for heavy oils from Saudi Arabia and Mexico. In the current scenario, with the export ban, there may be a glut of oil. Considering the huge amount of crude oil available because of improved technology in hydraulic fracking, there are more arguing for export than against.

Pipelines in the US

There are more than 3.2 million kilometers of pipelines to transport oil and gas in the US. Still, the pipelines in the US haven't kept pace with the booming oil production in the country. There has been few developments, albeit sporadically. The Transcontinental Gas Pipeline Company recently completed a pipeline to carry gas North to New York and New England. The excess oil?

With the backlog comes the Keystone pipeline into the news. Construction of the keystone pipeline to transport tar sands oil from Canada to the US, began in 2005. It became operational in June 2010. Phase 2 and 3 followed soon after. It was phase four known as the Keystone XL project that ran into trouble with the environmental groups in the country. A shorter route to transport oil from Alberta Canada to oil refineries on the Gulf Coast, the pipeline would also help create thousands of jobs. The environmentalists, on the other side, call the oil dirty contributing to Global Warming. That said, recently, the Obama administration extended the review of the pipeline indefinitely- at least not until the November elections. So, who can concoct oil from thin air? And who can teleport oil and gas?

The pipeline would definitely help the US in its quest for Energy by stabilizing and increasing domestic oil supply and whereby lowering the oil prices in the US. Hemmed in by regulation, why kill a flourishing industry ? And it's not only a question about the Keystone XL pipeline, infrastructure for oil and gas in the US needs vigorous re-thinking. Or else, apart from decimating the oil glut, the dream of energy independence in the US will remain just that – a dream.

« Previous
What sets Oil Prices?
Next »
ISIS creates an oil shock, but why?