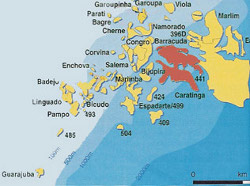 There has been a slew of oil discoveries around the Brazilian coast in recent times. Could they make a difference to the oil thirsty world of ours? Let's see:

Petrobras, the state controlled Brazilian energy firm, has found two accumulations of oil in the Campos basin. The recoverable reserves of the accumulations have been put at 65 million barrels. The discoveries were made after drilling in the exploratory well, 6-BR-63A-RJS in the Barracuda concession area. The well is about 100 km off the coast of Rio de Janeiro.

You may ask why they are termed 'two separate finds' when they are located in the same well? That's because the accumulations have been found in two regions of the well-one in the subsalt layer and the other in the post-salt layer. And, both the reservoirs are separated by miles.
The company had also announced two new discoveries in block 15/06 in the Angolan waters early this February. All these discoveries strengthen the hand of the deepwater oil exploration and production company- Petrobras. According to a survey by Ernst and Young, Petrobras ranks eighth in the list of biggest global companies in terms of market value. The company is also the largest in Latin America-by revenue and market capitalization. With the news of the discoveries the shares of the company rose to a two month high.

The bigger of the two finds, 40 million barrels, lies below the first find in the subsalt layer at a depth of 4,340 metres below the ocean floor. These are pre-salt carbonic reservoirs. The volume of recoverable oil from the post-salt find has been put at 25 million barrels. Tests carried out point towards light oil (280 API) with good productivity in the reservoirs.

Petrobras has about forty fields in the Campos region. The region is very rich in oil contributing to about ninety percent of Brazil's crude production. In recent years, Petrobras has made series of oil discoveries in the Campos and Santos basin.
The discoveries were made in an attempt to cut production cost by exploring for oil in adjacent areas of previous oil finds. Petrobras already has production, storage and offloading infrastructure to extract oil in the Campos basin. So, the company may extract the oil interconnecting well 6-BR-63A-RJS to the already installed marine Platform P-43.

And, the discoveries will have to be to be submitted to the National Petroleum, Natural Gas and Biofuel Agency (ANP) for an assessment plan immediately.
In addition, this month the US's Export-Import Bank made a 'preliminary commitment' to lend about $2 billion dollars to Petrobras. This loan is for exploration of offshore oil fields in Tupi oil fields, Santos basin. The Tupi fields are said to hold about 5-8 bn barrels of recoverable oil. Thus, Brazil is making its presence felt in the oil market.