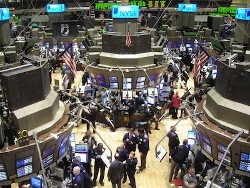 On Jan 21, the US President Barack Obama announced a series of measures to reduce risk in the financial sector. The proposals intend to tighten the regulatory mechanism and prevent a second- or like- sub-prime mortgage crisis. That is, the banks will not be able to put the whole economy at risk-again.

"If these folks want a fight, it's a fight I'm ready to have" said Obama. The folks are the financial institutions like the banking sector which would have limits on trading activities. Financial institution backed by the government will be prevented from taking huge risks. The move would impact Wall Street's trade directly.

The proposals have been dubbed as 'the Volcker Rule' after the former Federal Reserve Chairman, Paul A. Volcker, who advocated strong financial reform with more regulatory control. The regulations aim to correct the soaring profits and obscene bonuses of certain firms. "We should no longer allow banks to stray too far from their central mission of serving their customers," were the words of The US President.

Coming on heels of his party's election loss in Massachusetts, the President has used a populist stance. His move looks like an attempt to stop the slide in his popularity rating. A smart move nevertheless, as it's no secret that banks are hated by many people, being held responsible for the economic crisis. In addition, the bailouts of the banks using the taxpayer's money created a huge public outcry. Since then there has been pressure from various quarters to regulate the financial system. The first proposal was thus put forward by President Obama in June 2009. Then on Dec 11, 2009 the House approved the Democratic plan to tighten federal regulations, especially of the Wall Street.

Some proposal that preceded the Volcker rule:

These proposals would limit banks and Wall Street firms which own banks from owning, investing in, sponsoring or advising any hedge funds or private equity funds. As sharp move as the US banks have a hefty nine percent share in private equity capital.

The regulations will separate commercial banks from investment banks. Banks trade for profit backed by the deposit insurance, safeguards and guarantees bestowed on them by the government. Obama plans to limit these risks, as they are subsidized by the taxpayer who would suffer if things go wrong.

The president said that he cannot accept a system where shareholders make money on the operations 'if the bank wins but taxpayers foot the bill if the bank loses'. Thus only commercial banks that stay away from proprietary trading on their own accounts would benefit from the Federal Reserve's discount window. (The federal discount window or Fed's use of credit, in short, is a government loan facility which helps the banks to borrow reserves at a discount rate. It helps alleviate the liquidity problems of the banks).

In other words, banks can either engage in proprietary trading or resort to being a traditional bank -not both. Banks like Goldman Sachs and Morgan Stanley would be affected as they will have to forgo their status as commercial banks if they want to continue in proprietary trading. Also, both the banks will have to leave from the private equity businesses. (However, the banks can still return their deposit base-which is small- and withdraw from the federal discount window).

Elsewhere, China too is tightening its monetary policy. Some of its banks have been asked to halt lending for some time. This comes in the backdrop of heavy lending in the first two weeks of the year. Together with Volcker rule and the Chinese move, the stock markets around the world fell with the Wall Street reeling under the worse decline in a day in three months. The banking sector has reacted sharply which found resonance in the stock market and dollar-both fell.

Crude oil and gold prices too fell soon after the Volcker rule announcement. This was based on investor fear that banks won't be able to trade in crude futures on their own accounts.

Ramifications of the Volcker proposals on oil:

The Volcker rule is yet to be passed by the senate; hence it's still early to predict the actual trajectory of the oil prices. Indeed, some of the proposals may not even see the light of the day. Still, taken together, the oil prices may not increase to the record levels seen earlier this year. On the face of it, this is good for the consumer who will have to spend less on transportation. However, the oil industry would have to battle the underinvestment. Also, if the banks were to withdraw the investments made, the whole industry would be affected in the long term.