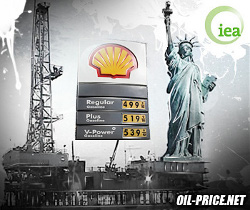 IEA officials have distorted figures to downplay the oil crisis.

Oil is slippery, probably why the people associated with it are too. According to reports in the Guardian, a whistleblower at the IEA, no less, has claimed that the agency has been deliberately downplaying the shortage of oil for fear of panic buying. The whistleblower further reveals that it was the US which used its influence to nudge the agency to underplay the rate of decline of oil from the existing fields, not to mention asking it to overplay the chances of finding new reserves.

The revelation couldn't have preferred a better timing-just on the eve of the release of the World Energy Outlook. The IEA was established thirty five years ago in 1974 as a quasi-political body to prevent another oil crisis, track and study the global oil market and safeguard oil supplies to the west. They publish the World Energy Outlook every year, on demand and supply of oil used by many governments for their energy and climate change policies. Last year, the World Economic Outlook asserted that oil production could be raised from 83mb/d barrels at present to 105 mb/d by 2030. It mentioned that about two-thirds of this would come from fields 'yet to be found or developed'. The new report released this year echoes last year's figures; in the reference scenario it projects a recovery in 2010 reaching 88 mb/d in 2015 and 105 mb/d in 2030 'with enough investments.'

Dr. Fatih Birol and his flippancy

Meanwhile, Dr. Fatih Birol, Chief Economist at IEA in an interview to Steve Connor of 'The Independent' newspaper said that the global oil production would 'peak within 10 years' and that the governments were 'woe-fully' under-prepared for the crisis. He wanted the world to act immediately and be prepared to prevent rapid increase in oil prices. The assessment seemed to be based on study by IEA of over 800 oil fields where it was found that the average decline in oil production was at 6.7 per cent a year compared to 3.7 of the previous year. In theory, it stated, there was enough energy to meet the growing demand. What was needed was investment to the tune of $ 450 billion with the bulk spent in OPEC countries, where the world's future supplies are believed to lie.

His words, "One day we will run out of oil. It will not be today or tomorrow, but one day we will run out of oil and we have to leave oil before oil leaves us, and we have to prepare ourselves for that day," he said. "The earlier we start, the better, because all our economic and social system is based on oil, so to change from that will take a lot of time and a lot of money and we should take this issue very seriously." This was not a breakthrough as the IEA had said in the World Energy Outlook 2008, that existing oil fields were declining by at least 4.00% if not 6.00% per annum, and that to actually lift global oil production would require not billions, but trillions, of investment.

Obviously Fatih had to face criticism but that didn't justify what happened next. In typical bureaucratic style, the IEA Press office denied that the IEA had recognized Peak oil projection in the next ten years. Fatih was said to have been 'misquoted' by the journalist. "The article incorrectly made it sound that the total oil production (including unconventional oil etc.) is going to peak at that time. Taking into consideration gains from unconventional oil, oil peak will be later than 2020, more around 2030..." Not long after, Steve Connor filed a complaint stating that the interview was taped, so the IEA retracted and no further arguments of Birol being 'misquoted'

Why the manufactured lies?

The scenario is confusing and unclear. Now what to believe, the printed assertions or the statements of its members? If investment could bring in surplus oil, where would the oil come from? Indeed, Oil had already peaked in countries like Kuwait, Mexico and Russia and there are hardly any new discoveries.

We in oil-price.net had predicted the peak oil production and the looming shortage of oil better than the IEA. We want- and are still striving for- the world to take note of the Copenhagen climate talks and a move towards more sustainable energy sources. Coming back, M. King Hubbert, geophysicist, predicted in 1956 a decline in the US oil output in the 1970s, even as the oil companies denied it. Oil production peaked at 10.2 million barrels a day and declined since then. Hubbert predicted a decline in the world oil production too. Oil industry experts like, Kenneth Deffeyes and Matt Simmons, believe that the peak oil (Peak oil is the point in time when the maximum rate of global petroleum extraction is reached, after which the rate of production enters terminal decline. was much closer than previously thought. A report by the UK Energy Research Centre (UKERC) says that worldwide production of oil could 'peak' and go into terminal decline before 2020.

Obviously, People who oppose the peak oil theory are the IEA, oil industry and OPEC. OPEC had even drubbed the IEA's decline rates in the world oil fields.

Abdullah al-Badri, OPEC's secretary-general, words on the study. "I don't trust this report," he said. "I don't think the IEA is equipped to review these oilfields...I don't see how it will be useful."

He further added that OPEC, the cartel of 13 oil-exporting countries that produces 40 per cent of the world's oil, had not been involved in drafting the study, which he dismissed as alarmist. "We have the reserves, we have enough oil for the foreseeable future," Mr. al-Badri insisted.

When it comes to lies, OPEC sizzles but why does IEA give unrealistic figures- is it only to not 'anger the Americans'? And, could the IEA take umbrage under the assumption that their role was only to forecast oil consumption not oil production? They don't want to create global panic, as understandably they are politicians who want to keep their job. Between lying and alarming people, politicians of the IEA would rather lie. But what will happen when these scenarios play out due to the oil crunch?

Some oil companies answer this by pointing to the Tar sands of North America from which oil could be extracted. However, extracting oil from the tar sands are expensive than the conventional oil. A recent post by Greenpeace says that oil firms and energy investors would find it harder to justify long term investments in tar sand projects as impact of global renewable energy sources could lead to fall in demand for fossil fuels.

What will happen if the oil prices rise all of a sudden?

Ok, let's take these real life examples of fuel protests. A series of campaigns (2000, 2005 and 2007) were held in the United Kingdom against the rise in cost of petrol and diesel. In May 28, there was protest in Bulgaria, and in June 2008, Spanish truck drivers protested amid fears that the country would come to a standstill-all due to increase in oil prices.

Immediate effect of these protests: Huge queues at petrol stations and panic buying and hoarding of oil. Oil crisis could lead to shutdown of Schools, College and Hospital; water and food shortage with blackouts. Crime will increase and civilization could disappear.
Some more snapshots:
Wars: We have already seen wars due to oil. It's not rocket science to guess then that there will be more wars for the remaining oil resources. No, not only the US, there is another superpower which wouldn't hesitate to wage oil wars-China. According to BP Statistical Review of World Energy 2009, China leapfrogged OECD nation in the consumption of primary energy; and the demand is still rising further with each day.
Food: Food prices would increase, that's given. But Oil is used in allied Industries for producing farm machinery, fertilizer and pesticides production, then in processing the food, storage, and transport. There will be acute food crisis in the world, and far more worrying is the fact that starvation deaths in poor countries of the world could increase manifold.
Collapse of economies: Oil is the driver behind the growth of economies. It is not only important for transportation but also for agriculture, industries and infrastructure. No oil-then collapse of everything.
Inflation: Increase in oil prices would increase the price of all commodities. It could cause a return of stagflation like the 1973 oil crisis, as demand will go down due to high oil prices leading to a stagnant economy. There would lead to recession with stock market crash, bankruptcy and job losses which will further lead to depression.

Now that the lid has blown off the IEA, people have started believing in oil-price.net, and the looming oil crisis, what are our suggestions? Right now there is no resource available, no doubt, to substitute oil which is so versatile and rich in energy. Wind waves and solar energy are yet to take off in a big way and we are yet to see a shift from transport technologies to green technologies. But this is how we should move forward; stimulate investment in alternative technologies/renewables while being fully prepared for the oil crisis. 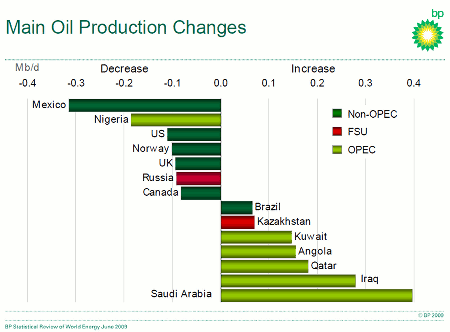 « Previous
Did High Oil Prices cause the Financial Crash?
Next »
How will the Dubai crisis affect oil prices?