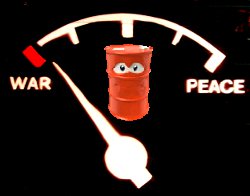 The political world seems to be at such crossroads as of right now. The Middle East seems to be at the center of all debates. The fact is that the reason for all these fiscal and political issues is a three letter word - OIL.

As the world celebrates Bin Laden's riddance, broader questions arise. How did the Pakistani secret service manage to hide him for the last 9 years? Will Al Qaeda collapse as a result of his death? Will stability return to the Middle East? The answer to that last question depends on the terrorist organization's level of influence on the uprisings. But any change in the Middle East situation for better of worse in the days following his death will be proof of the organization's reach and shed light on the uprisings' true agenda.

Libya, We've Got a Problem

For some time now Libya has been a thorn in the side. Following a list of other Middle Eastern and North African countries, Libyan people have been calling for the ouster of Gaddafi who has ruled the roost for a long four decades. Gaddafi, on the other hand, is hell bent on proving that if he were to leave, Libya would be plunged into a chaotic situation like never before. He vowed to burn the extensive oil fields of Libya that have already stopped production in view of this crisis.
While Libyan bombs rain down on the rebels portrayed as civilans, the West has reacted by launching air strikes against Muammar Gaddafi's in accordance with U.N. resolutions. In the past, a simple policy has been applied to the country that fulfills a large part of the oil needs of Europe. Stay away from terrorism and sell Europe the oil you produce and you will not be bombed off the face of this earth. This underlying threat has worked quite well in the past.

Now, French, British and American aircraft carriers are anchored in the Red Sea and provide support in favor of the rebels in Libya. The question is, if the same were to happen in Saudi Arabia, what stand would the U.S. take? Libya barely supplied any oil to the U.S. directly but with the revolutionary aura ready to claim the Kingdom next, there are chances that the oil price could reach almost double the exorbitant price it is at right now. 1.7 million barrels a day that comes from the Persian Gulf, mainly Saudi Arabia, will be difficult for the U.S. to do without.

Demise of the Dollar

A larger problem will be that, when the dust settles on the Middle East, and new governments reform previous agreements, oil might no longer be priced with the U.S. dollar. In effect, this will be absolutely catastrophic. The fall of the U.S. dollar will be effective immediately and the country will be too entrenched in debt to do anything about it. There seems to be a dearth of viable options for the U.S. who is the world's largest oil user and Europe. Sitting on a time bomb that can plunge their currency and economy into the Stone Age, they have a few tough decisions to make.

The 'Day of Rage' in Saudi Arabia didn't amount to much. Stock markets that fell during the last month rose again as Saudi steered clear of the dangerous situation. The fact remains that something or the other like this is bound to happen soon. The battle may have been side stepped but the war is still on and threatens to spread to Syria.

The U.S. military is one option that may be on the cards. For the support of the people of the country though, a war needs to have a moralistic appeal. Oil may be a great reason for the profit crazy, but for those who stand to lose their sons and husbands, it's a reason harder to sell.
The second invasion of Iraq came a few weeks after Saddam Hussein threatened to stop trading oil in US dollars. Although Saddam's ellusive WMDs will be remembered by most as the official motivation behind Iraq's invasion, the threat to the dollar was real and military action ensued.

Time for Use of Strategic Oil Resources?

Another option that might find favor with the people is the usage of the strategic oil resources of the country. While this may be on the cards sooner rather than later, these resources have been kept aside for a time when there is no more oil to be found under the surface of the earth anywhere all over the world. Though times are dire, that situation still isn't here.

The best option then, seems to be to find another source for oil and natural gas imports. The country that stands to gain with respect to the turmoil in the Middle East is Russia. The Sheikh's loss might prove to be the Russian's gain. The man of the moment then is Vladimir Putin. He has already put himself in place as the one man that the West can turn to. Gazprom, Russia's largest producer of oil and natural gas resources has been directed to open up their pipelines to their rivals. Companies like Surgutneftegaz stand to gain from any business that the U.S. and Europe direct at them. Surgutneftegaz is the fourth largest oil producing company that stands apart as it is in no debt whatsoever. They have now opened up their distribution channels and intend to focus on exports to the world.
With the Arctic oil opening up and the Yamal peninsula offering itself up, Russia is leading the pack to become the world's largest oil exporter. After the history that they share, the U.S. might loathe the idea of being beholden to Russia but Russia seems to be stepping forward as a changed country.

A change is on the cards. For the countries of the world, Russia might just be the option that they have been looking for. With the upheaval in the Middle East and the might of the strong cartel created by the OPEC, finding another option at the earliest is not just important but indispensable.