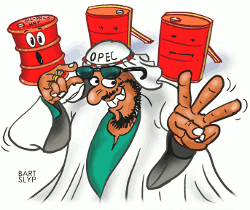 How many real oil barrels do you see here? The UAE wants you to believe there are 3. But only 1 is real, they made up the other 2.

Why does OPEC lie about its oil reserves?

Can fiction masquerade itself as fact? Well, there's a case study at hand-OPEC and its reserves. OPEC's crude oil reserves grew by almost 7.9 percent in 2008-from 940 barrels in 2007 to 952 billion barrels. This is attributed to the 'reassessment' of proven crude reserves of a member country Venezuela. Why, then, is there scepticism on this news?

In 2006, PIW (Petroleum Intelligence Weekly) broke the news, in a leaked memo from the Kuwait Oil company (KOC) that Kuwait's proven reserves were only half of the reported figures. In the same year, Dr. Samsam Bakhtiari, then a senior expert of the (NIOC) National Iranian Oil Company said that the oil reserves in the Middle-East were "about half, or even less than what the respective national governments claim".

So, all the bloated oil reserve claims look closer to fiction which throws another question, why does OPEC lie?

Inflated figures of the oil reserves mean that oil decline will come sooner than anticipated by most. According to a report from the US Joint Forces command, surplus oil production 'could entirely disappear, and as early as 2015'. After reading this, if you think that this is just one of those doomsday predictions; wait till the oil prices hit the roof again-OPEC would not be able to increase the oil production. Then, remember, you read the predictions here first.

« Previous
Oil supply crunch and the world.
Next »
Did Buffett buy Railways because of Peak Oil?